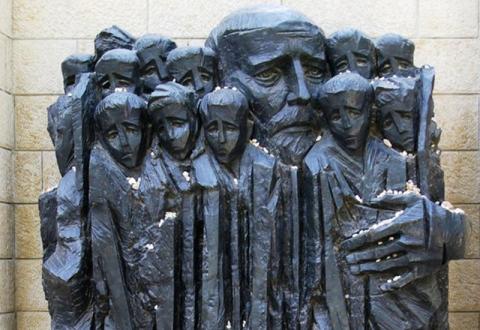 It was during the height of the Final Solution that on August 5, 1942, Nazi SS soldiers surrounded the well-known orphanage in the Warsaw Ghetto. They were there to escort Janusz Korczak, his associate Stefania Wilczyńska (Stefa) and about 200 children from the orphanage to the Umschlagplatz (deportation platform) where they were to board a train bound for the gas chambers of the Treblinka death camp.

They were never heard from again. Korczak was a beloved children’s author, pediatrician and teacher whose values and lessons have been carried through the generations. On Tuesday afternoon, Yad Vashem will mark 77 years since his murder with a symposium and a special commemoration ceremony. The ceremony will end with the traditional release of kites in memory of Korczak at the Monument to the Jewish Soldiers and Partisans.

Korczak was born Henryk Goldszmit on July 22, 1878 in Warsaw, Poland. “When Korczak’s father, a prominent lawyer and the sole source of income for the household, died after an illness in 1896, the family was left without a source of income and Korczak became the sole breadwinner for his mother, sister and grandmother,” Yad Vashem explained. “The family environment in which he grew up undoubtedly influenced his personal development and his awareness and sensitivity toward social problems.”

He entered a literary competition in 1898, and it was then that he used the pseudonym Janusz Korczak, a name he took from a well-known 19th century novel Janusz Korczak and the Pretty Sword Sweeper Lady. “Between 1898 and 1904, Korczak studied medicine at the University of Warsaw and also wrote for several Polish newspapers,” Yad Vashem explained. “He specialized as a pediatrician and worked at the [Bersohn and Bauman] Children’s Hospital.”

He later served as a military doctor in the Russo-Japanese War in 1906 and 1906, and it was during this time that he decided he could do more as an educator rather than as a doctor, as well as “make a lasting impression and contribution to the world.”

In the years following the war, Korczak joined a philanthropic organizations for orphaned children and also opened a Jewish orphanage. It was then that he appointed Stefa to work with him as his deputy director and house mother of the orphanage, which he called Dom Sierot. “About one hundred children lived in the orphanage,” Yad Vashem explained. “He established a ‘republic for children’ with its own small parliament, law-court and newspaper, later reducing his other duties as a doctor.”

In the late 1920s and 1930s, he wrote several beloved children’s books, books for adults on child-minding, opened a children’s newspaper and had his own radio show – all which gained him a large following. His education teachings, which are still used today, stress that “childhood is not only the period of preparation for life, but an essential part of life itself and every child should be given full rights and dignity.”

He believed strongly in the individuality of children and insisted that each child should be considered according to their uniqueness, talents and needs. At the outbreak of World War II, Korczak volunteered for duty in the Polish Army, but due to his age he stayed with the children in his Warsaw orphanage. “At the end of November 1939, the German authorities forced every Jew to wear a white armband with a blue Star of David, but Korczak refused to do so and would not remove his Polish officer uniform even though he was putting himself in danger by not doing so.”

According to Yad Vashem, “when the Germans created the Warsaw Ghetto in 1940, his orphanage was forced to move to the ghetto. “Korczak went with the children even though he had repeatedly been offered shelter on the ‘Aryan side,’ however he always refused these offers, saying that he could not abandon his children,” the Holocaust remembrance center said.

He and Stefa continued to fight for the well-being of the children while in the ghetto, and would go door to door begging for food, warm clothes and medicines for them. Despite his frail health and personal problems, he worked extremely hard to better the lives of the children in the orphanage and give them the most normal life possible.

After his murder in Treblinka, it was discovered that he had written a diary sharing his thoughts, notes and memories about life in the ghetto. It was published in 1958. His legacy, lessons and educational values have continued to inspire generations of teachers and children alike.