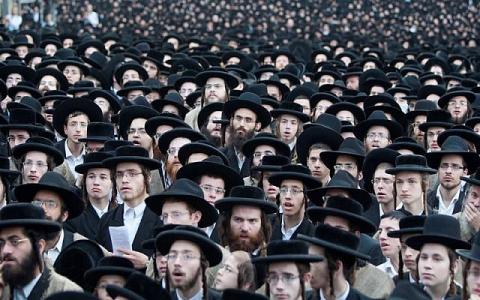 When the coronavirus crisis began one year ago, it seemed as if the lethal illness might be the factor that would finally bring the ultra-Orthodox community into the mainstream. Members were flocking to the forbidden internet in search of information, and creating widespread distrust in community leaders, raising expectations that the Haredi population was about to join the rest of society.

But as time passed, it became clear that the crisis was only exacerbating the situation, with potentially explosive consequences. The ultra-Orthodox community opened their schools and held mass events, in violation of strict coronavirus rules, while police enforcement of the regulations was demonstratively lax. This led to anger in the rest of the population, who felt that the Haredi public was thumbing its nose at the state while being coddled, despite the fact that infection rates in Haredi communities were breaking all records. The ultra-Orthodox community went on the defensive, with numerous media outlets and community leaders stoking and often creating a sense of persecution, whereby the police and state were adopting an anti-Haredi stance.

A closer look at the data collected for the Israel Democracy Institute’s Democracy Index, made available to Haaretz, shows that tension between secular and Haredi communities, and between the latter and various state authorities, is intensely high. According to the study, 40 percent of ultra-Orthodox respondents said that the biggest tension in Israel is the one between secular and ultra-Orthodox citizens. According to the data, only around a fifth of religious and secular Jews thought the same, and only 12 percent of those defining themselves as ‘traditional.’

Persecuted, but satisfied — as long as the state is Jewish

Despite the sense of being persecuted, of all segments of society, the ultra-Orthodox expressed the greatest satisfaction with life in Israel. The scale slides down along with the respondents' identification with Jewish orthodoxy: 92 percent think Israel is a good place to live in, the same proportion as religious Jews. Eighty percent of traditional respondents and 65 percent of secular respondents said the same.

“Haredim have it good in Israel in its present situation” says Dr Gilad Malach from the Israel Democracy Institute. “They are the group with the highest rate of satisfaction with the state of the country and with their status in it.” Malach says that Haredi society does identify some threats to their current status. One is the conflict between Haredim and secular Jews, which is perceived by the former as particularly severe, as shown by the data. “Their anger is directed mainly at the media, the Supreme Court and the police, all of which are highly mistrusted,” says Malach.

A further threat, as they perceive it, is to maintaining their political influence, says Malach. “They believe that the campaign against corruption is fictitious, intended to depose their representatives and Netanyahu. In this context, the Supreme Court and the Attorney General, who is ultra-Orthodox, are not very trusted.” The data shows that 34 percent of ultra-Orthodox respondents believe the government to be corrupt, the lowest rate in the country along with the religious. Forty-three percent of religious traditional Jews believe this, as do 53 percent of the non-religious traditional. More than three-quarters of secular respondents think their government is corrupt.

Oppressed by the police, threatened by Arabs

For 82 percent of ultra-Orthodox respondents, Jews and Arabs should live segregated life to preserve their identity. 62 percent of religious Jews, 45 percent of traditional Jews and 25 percent of secular Jews think the same. Almost all of them believe that fateful decisions on peace and security should be made by a Jewish majority, a belief that is shared by most of their co-religionists. Even among secular Jews, 62 percent think a Jewish majority should make strategic calls.

For Malach, “the conclusion is clear: the Haredi population identifies very much with a Jewish Israel, but much less so with its democratic character.”