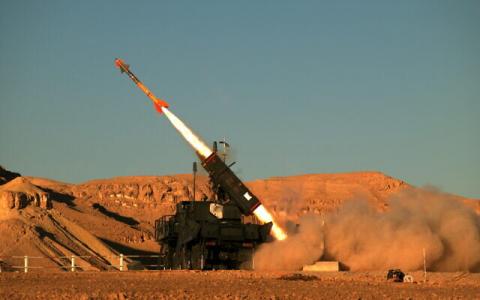 Israeli military exports reached $8.3 billion in 2020, buoyed by a 15 percent spike in the number of agreements signed compared with the previous year, the government announced Tuesday. Despite fears the coronavirus pandemic would impact 2020 sales, Israel cited new markets in allowing sales jumping $1 billion from 2019. It’s the second highest sales figure ever, behind 2017, when the total hit $9.2 billion.

“During the past year, we have worked intensively to deepen government agreements and cooperation with our partners around the world, and we will continue to do so,” Defense Minister Benny Gantz was quoted as saying in a statement from his office. As in previous years the bulk of the military exports went to countries in Asia and the Pacific region, the ministry statement said.

The government figures said radar and early warning systems, and ammunition and armament, each contributed 16 percent of sales, while manned aircraft and avionics accounted for 13 percent, as did observation and optronics.

Also on Tuesday, the Israel Aerospace Industry said it had signed a $200 million deal to supply drone technology and services to an unspecified Asian country. The deal is for the sale of the IAI’s Heron drone, including the more advanced MK II version.

A major supplier of arms to Azerbaijan, Israel in 2020 came under diplomatic fire from Armenia over the struggle between the Caucasus neighbors in disputed Nagorno-Karabakh.

According to data from the Stockholm International Peace Research Institute (Sipri), over the past five years Israel has been the top supplier of arms to Azerbaijan, with sales of more than $740 million, putting it ahead of Russia.