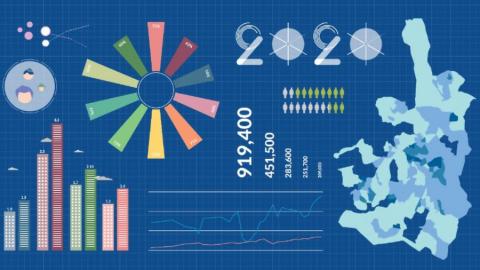 Some 50% of Israeli children from the country’s fastest-growing sectors are getting a third-world education that will not be able to support a first-world economy, without which there will be no first-world health, welfare and defense systems, according to a new report published by the Shoresh Institution for Socioeconomic Research.

“The absence of a first-world ability to defend itself in the world’s most violent region will jeopardize the State of Israel’s very existence,” Prof. Dan Ben-David, who authored the 2021 report, told The Jerusalem Post. “This is an existential threat.”

Israel has enjoyed one of the world’s highest fertility rates for quite some time. The most recent report shows that Israeli families have an average of 3.1 children – a minimum of an entire child more than any other OECD country.

Families in Mexico and Turkey have an average of 2.1 children. The rest of the countries in the list average between one and 1.9. However, those children are being born mostly into certain sectors: Haredi (ultra-Orthodox) and Arab Israeli students each make up more than one-fifth of Israel’s first graders today, about 43% in total.

Most haredi students do not even study the core curriculum. The average score of Arab Israelis in the basic subjects is far below the entire developed world. The education provided to students in Israel’s social and geographical peripheries is often inadequate as well. That’s about 50% of students, and it “turns the national education picture into a ticking time bomb,” Ben-David said.

The COVID-19 pandemic highlighted the fundamental problems of the education system, bringing to the forefront challenges that had existed for years prior, despite continual investment. The Education Ministry budget is larger even than that of the Defense Ministry, yet students are simply not making the grade.

Israeli children’s average level of knowledge in mathematics, science and reading is below that of every developed country, the Shoresh report showed. Educational gaps in primary education within Israel are also much higher. And the country has more students who do not reach the minimum level of knowledge set by the OECD – even without considering most ultra-Orthodox children, who do not study the materials and therefore do not participate in international exams.

Israel’s non-religious Jewish schools rank below a third of the developed countries, when looking at the most recent average achievement scores in 25 OECD countries and in Israel on the Program for International Student Assessment (PISA) exam, which evaluates what students know in reading, mathematics and science and what they can do with that knowledge.

The country’s religious schools fall below 80% of those countries. Arab Israelis fall at the very bottom, including beneath nine of the 10 Muslim countries that participated in the most recent PISA exam.

While Israel cannot be compared to the United States in terms of population size, the US, like Israel, can be divided into four major ethnic groups. In the US, PISA scores show, Asians and whites are getting a better education than every student in every developed country, achieving an average score of 549 on the exam.

Moreover, Israel has the highest percentage (33%) of students in any OECD country scoring at or below “level 1” in mathematics, science and reading on the PISA exam, on which one is the lowest score and six is the highest. “If education is a jumping-off board to the marketplace, with these gaps in knowledge, you cannot expect equality in future generations,” Ben-David said.

So, why is this happening?

THE EDUCATION system likes to blame the country’s large classrooms as the reason children are struggling to learn. But according to the Shoresh report, while this may be a contributing factor, not all Israeli classrooms are large, and there is no explanation for why efforts have not been made to reduce class size given the number of teachers that Israel employs per student – higher than average.

The number of students per teacher in Israeli elementary schools is nearly identical to OECD averages, according to the report, and the middle and high schools have fewer children per teacher than the OECD average.

Additionally, the number of instruction hours in Israel is greater than in most OECD countries.

As such, Ben-David pointed to a different challenge: the quality of Israeli teachers.

Some 79% of Israelis study to be teachers in one of the country’s teaching colleges, another 17% learn in general colleges and 4% are students in regular universities. The average psychometric score for those studying in teaching colleges is nearly 25% lower than the average for Israeli university students, the score is almost one-third (32%) lower for those who are accepted to general colleges, and still 9% lower even for those who learn to teach at the university level.

The situation becomes even more acute when looking at how Israeli teachers rank on the OECD’s Program for the International Assessment of Adult Competencies (PIAAC) test, which examines the basic knowledge and skills of adults ages 16-64. Israeli literary teachers’ skills are close to the bottom of the developed world, and the knowledge of Israel’s math teachers is the lowest among developed countries.

“Israel regards brain power as its primary natural resource. Its hi-tech sector – nearly the only economic sector that’s thriving economically in the global arena – does not have nearly the number of workers with university-level educations that it needs. How can teachers who could not even get accepted to universities themselves educate children at a level that could bring them there?” Ben-David asked. “How can we expect our kids to reach university and be a part of modern society if their teachers are not at that level?”

As Israel goes back to school on September 1, rethinking its classroom models to keep kids safe from coronavirus, Ben-David said there is an equally urgent need to reimagine the way that Israel chooses, trains and compensates its educational staff. “The system is not functioning well,” he stressed. “We need an overhaul of the entire system.”

While the sky is unlikely to fall this year or next, Ben-David told the Post that if Israel does not act soon, there will be “a point of no return.” He highlighted the situation in Beirut that was brought on in large part by demographics – a less fertile, more educated elite sector of society was overturned over time by a more fertile, less-educated poor population.

“It is hard for young people today to imagine that Beirut was once called the Paris of the Middle East,” Ben-David said. “Today, it is a poverty state at the brink of explosion.... Countries do fail.” To ensure that Israel is equally a success story in 2065 as it is today, Ben-David said that when it comes to education, “Israel must get its act together while we still can.”