Israelis throw away millions of tons of food 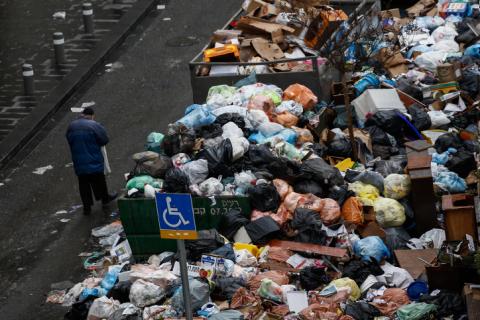 For many, the approaching High Holy Days are a time for plentiful celebratory meals, and hosting family and friends around the holiday table. Eager to ensure an abundant offering for all guests, the festive period – including Rosh Hashanah and Sukkot – is characterized by a sharp increase in food purchases, as well as food waste.

According to new data published by food rescue organization Leket Israel and accounting firm BDO Ziv Haft, some 234,000 tons (468 million lbs.) of food – from production to consumption – will go to waste over the holiday season. The loss is equivalent to more than one-fifth of Israel’s total annual food waste.

According to Leket Israel CEO Gidi Kroch, soaring waste during the holidays is driven by increased consumer purchases, and increased manufacturing and retail efforts to match growing demand. “What we are trying to do is to educate people about the amount of waste that they create at home,” Kroch told The Jerusalem Post. “It’s evident when you see the garbage collection after the holidays, and all the bins are full. If you look at your own household and your neighbors, you can see that the amount of food thrown out is terrible.”

The average household will spend approximately NIS 2,900 ($820) on food during the holiday season, according to the NGO, of which an estimated NIS 440 ($125) is ultimately thrown away. “The holidays are so close together and it is customary to have a lot of food,” Kroch said. “People invite others and it becomes a festivity of food. We know that we cook too much. Some take leftovers home, some is used the next day and some of it is thrown away.

“A lot of the farmers plan to have surplus or more fresh produce around the holidays because there is growing demand, and they need to supply that demand,” he said. “Retailers are demanding more supplies and food manufacturers are pushing more food. There are buy one, get one free deals, and we throw the free one away.”

According to an annual report published by Leket Israel and BDO, Israelis threw away some 2.5 million tons of food in 2018, worth a total of NIS 19.7 billion ($5.5b.) and constituting approximately 35% of all food production.

A staggering 1.2 million tons of food, almost half of the quantity discarded was possible to rescue, the report revealed. While 18% of the value of food waste occurred during production, 82% of the waste occurred during distribution and consumption. “Surplus in itself is not bad to have, but the question is what we do with it,” said Kroch. “If we throw it away and it turns to waste, that’s not the way to proceed. If we can distribute it to people in need, that is OK.”

To close the food insecurity gap in Israel, only a fifth of wasted food last year – worth approximately NIS 3b. ($835m.) – would need to be rescued and distributed to individuals at risk. Doing so would only cost NIS 830m. ($230m.), less than a third of the cost of the wasted food itself.