Israelis pessimistic about democracy and the future 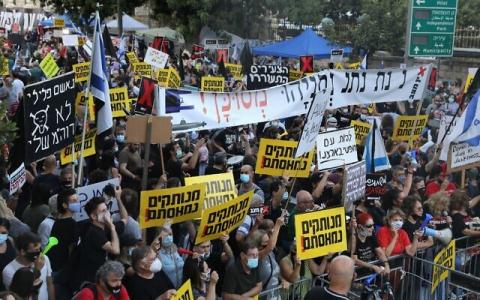 The signing of the Abraham Accords last month between Israel and the United Arab Emirates didn’t impact the optimism of Israelis for the future of democratic governance of their country – and neither did the protests on their pessimism.

As in the past, a minority of Israelis is optimistic about the future of democratic governance while a majority is optimistic about national security. No change occurred this month compared to last month.According to the Israeli Voice Index for August 2020 published on Tuesday, 52.4% of Israelis are pessimistic about the future of democratic governance. Some 68.4% think the days of the current government are numbered, anticipating a fourth round of elections after the end of the period specified by the compromise that was recently reached between Likud and Blue and White.

Only 14.6% think both sides made similar concessions to reach the compromise that is supposed to prevent elections. Evidently, the assessment of the Center and the Left is that Benny Gantz made more concessions, while the Right thinks Netanyahu conceded more. During the last two months, Israel has been shaken by protests against Prime Minister Benjamin Netanyahu and the government’s policies, protests that have intensified in August.

About a tenth of the interviewees said they had participated in recent months in one or more of the protest activities, with a similar rate among Jews and Arabs, whereas an expected disparity can be seen when analyzed according to political affiliation.Moreover, the rate of Jewish participation in the protests is highest among the Left (30%) and lowest among the Right (11%). Regarding the age category of the demonstrators, the current wave of protests is propelled by both the youngest and the oldest age groups, with a much lower presence by the intermediate ages.

RESPONDENTS WERE also asked about the impact that warming of ties with the UAE will have on the economy, and what benefits are expected from it, as well as the impact on the negotiations between Israel and the Palestinians. A majority of interviewees think the normalization of ties will benefit Israel in the economic (79%), political-diplomatic (76%), tourism and vacationing (76%) and security-military (53%) domains.

However, only a slim majority of Jewish respondents (55%) and a third of Arab ones believe that the warming of ties will contribute to promoting negotiations with the Palestinians. Some 37% of Arabs think this accord will detract from the negotiations between Israel and the Palestinian Authority. Regarding the political orientations of the respondents, Jews from the Left are undecided, with no real majority nor opinion on what impact the deal will have on that matter, while on the Right, the majority says normalization will most probably enhance the negotiations.

When finally asked about how they see the future, pessimism is most prevalent.Under the combined influence of the worsening coronavirus crisis and the ongoing political crisis, only 27% consider that from the standpoint of the country, the coming Hebrew year of 5781 (2020-2021) will be better than the one that is ending, while the highest percentage (40%) expects that the new year will be worse than the current one.

Those who are optimistic about the new year tend also to view the public mood that way – and the opposite. A majority of those who report a pessimistic personal mood regarding the future see the public mood the same way; that is, there is a perceptual mirror image of the personal and the public. However, the rate of haredim (ultra-Orthodox) who see public optimism is three times higher than the rate among the secular.

The amount of those who think that next year will be worse than this one is much higher than it was in the past, and higher than the rate of those who think the coming year will be better than or as good as the one that is now ending. This survey was conducted on 605 men and women who were interviewed in Hebrew and 145 in Arabic via Internet and by telephone from August 31 to September 2.