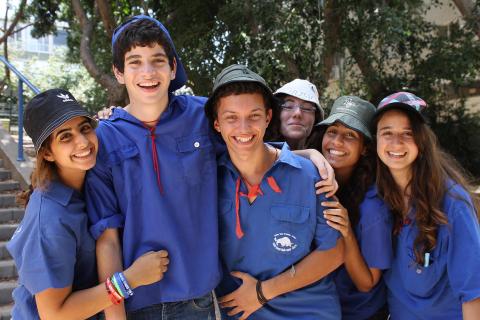 On the Eve of Holocaust Remembrance Day, the government of Russia gave an award to the Israeli youth group HaNoar HaOved VeHaLomed (Young Workers and Students – NOAL) for their educational activity and emotional and financial support for World War II veterans.This is the first award of its kind given in Israel.

Over the course of a decade of educational activities, the youth group has educated tens of thousands of young people, both members of the organization and others, on the history of World War II veterans. NOAL youth visit such veterans regularly and maintain contact with them. Educational activities for these veterans that the youth group has organized include ceremonies, marches and a book of interviews with them, cataloging their experiences.

The award was given last week at the NOAL House in Tel Aviv in a ceremony attended by Russia's Ambassador to Israel Anatoly Viktorov, NOAL chairman Pesach Houspeter, chairman of the Alliance of World War II Veterans who Fought the Nazis Abraham Greenzied, NOAL general secretary Maya Geva and its Russian speaking coordinator Hagit Shwartzman.

"It is an honor to visit the center of one of the most important organizations in Israel," said Viktorov. "I am here on behalf of President Vladimir Putin who has decided to give you this honor to mark 75 years since victory and liberation in World War II. We know how much you do in NOAL for the veterans." "The Jewish people will be forever grateful to the Russian people for your bravery and the determination of the Red Army soldiers, which included half a million Jews, who with their body and sacrifice stopped the plague of Hitlerism and Nazism that threatened humanity," said Houspeter.