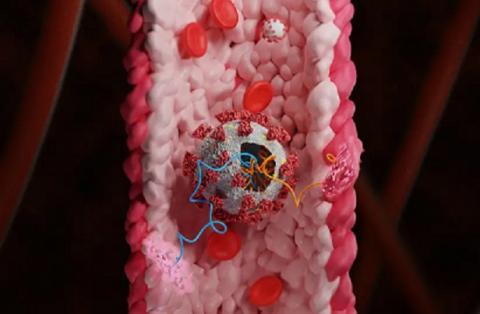 A special form of radiation known as millimeter waves can kill 99% of corona and polioviruses from surfaces within two seconds, new research from scientists at Ariel University has shown. The results can have important implications on how to disinfect environments and equipment in a fast and efficient way.

“Our laboratory focuses on electromagnetic radiation sources,” said Prof. Moshe Einat from the Department of Electrical Engineering, and a co-author of the study recently published in the journal Environmental Chemistry Letters. “This type of radiation operates in the millimeter-wave regime, which means that they have a wavelength of about three millimeters. Just for comparison, the radiation from a cellphone has a wavelength of about 30 centimeters, and that from a microwave of about 12 centimeters.”

Millimeters waves have many applications. In the medical field, preliminary research has shown that they can be very effective in targeting tumors and killing cancerous cells. In addition, they can be used to transfer energy and electricity without using wires, as well as in the manufacturing process of unique materials such as synthetic diamonds. “They make the process go much faster than the current ones,” Einat said.

After the coronavirus pandemic broke out, Einat and his team had the idea to use the waves to kill the virus, and they started cooperating with Dr. Gabi Gerlitz, a molecular biologist. “We saw that the radiation could increase the temperature of the vials and therefore kill the virus,” said Garlitz, lead author of the study.

It does not appear that the technology can currently target the virus in the human body, “but it can be very useful for rooms, equipment and all forms of surfaces that need to be clear from any virus and coronavirus specifically,” he noted.

According to Garlitz, the big advantage offered by millimeter waves is that they can disinfect a surface very fast. “Other methods currently used for this purpose, like UV radiation, take minutes and sometimes even a full hour, and in addition, they might be toxic for humans, which makes the disinfection process very impractical,” he said. “With our technique, we have cleared almost 99.9% of the virus within two seconds.”

The radiation is also very gentle on the surfaces, neither heating them nor affecting them, and therefore can be used on delicate surfaces such as electronic equipment. The scientists also tried the same technology with the poliovirus and obtained similar results. “We wanted to prove that the method works with viruses in general,” Garlitz said.

For the future, the researchers are focusing on applying the technique to disinfect water. “Water contamination is a worldwide problem,” said Garlitz. “We think that this could offer a solution for it.”