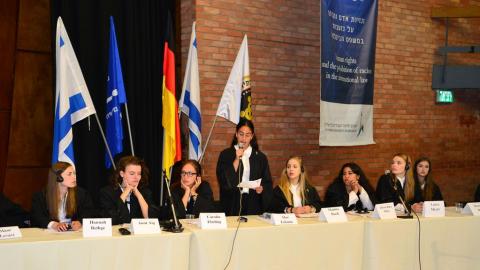 Ernst Rudin could be said to be the father of Nazi ideology. The German-based psychiatrist and neurologist was a proponent of “eugenics”, or racial “hygiene”. But despite Rudin’s advocacy of racial purity — support which led to the murder of thousands of so-called “genetic defectives”, and thereafter to the murder of Jews — he never faced trial at Nuremberg, where leading Nazis were charged with crimes against humanity.

Instead, Rudin was rehabilitated after the war and died peacefully in 1952. Now, for the first time, Ernst Rudin is to be put on trial, thanks to an energetic Israeli lawyer, Avi Omer, and a team of international legal experts. But the prosecutors and defenders of Rudin will be teenagers, many of whom are studying his case for an extraordinary “moot court” event due to be held in early January next year.

Mr Omer is the founder of the Forum for Social Excellence, an Israeli organisation aimed at educating Israeli teens in human rights and social responsibility. The high point of the training — of 300 handpicked teens from all levels of Israeli society — is a moot court, or mock trial, in which the teenage advocates prepare a case in front of a glittering array of lawyers and judges.

Next year’s event will include participants from the Israeli and American Supreme Courts, and, it is hoped, English judges from the European Court of Human Rights. To mark Israel’s 70th anniversary, Mr Omer wanted the teenagers — who will be joined by students from Europe, too — to try a case that had never been tried. “We didn’t want a regular Holocaust case in which the verdict was almost inevitable,” he told the JC. “But the Rudin case is amazing: he claimed he had only ever acted as an academic, even though his research, from the beginning, involved the killing of children”.

Among those who have agreed to help in the Rudin moot court is the former Canadian Justice Minister Irwin Kotler, who will give the keynote address at the opening of the case, and London-based libel lawyer Mark Lewis, who will help train some of the teenagers in their arguments to the court. Dr Esther Newman Cohen, an expert on international criminal law, is one of the academic partners.

All the presentations will be in English and Mr Omer and his team are hopeful that some British teenagers will be able to take part. Professor Paul Weindling from Oxford Brookes University is one of the academic advisers, as is Dr Shlomit Wallerstein, former Associate Professor of Law at Oxford University.

Historian Dr Etienne Lepicard of Ashkelon College will prepare the historic context for the event. It is also backed by the Israeli and German Medical Associations, which will provide evidence of the criminal activities of early Nazis in bolstering Hitler’s policies.

The Rudin case will mark the 70th anniversary of the Universal Declaration of Human Rights and that of the Convention on the Prevention and Punishment of the Crime of Genocide. “Through this court, judging no less than the responsibility of leaders and scientists who enjoyed impunity, we aim to start  a ripple effect of young future leaders who will start to see themselves as agents of change for the world and for humanity,” Mr Omer said.