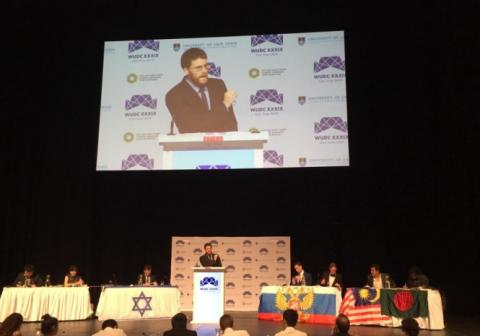 The Hebrew University of Jerusalem debate team won the World Universities Debate Championship last week in Cape Town, South Africa, in the English Second-Language category. Roy Shulmann and Elaye Karstadt competed against thousands of students from 20 countries and managed, above the rest of the teams, to convince judges of stances on a multitude of current events.

In addition to Shulmann and Karstadt’s defeat of the Russian, Malaysian and Japanese teams in the final round of the championships, the Tel Aviv University team, made up of Israeli Debating League chairman Amichai Even-Chen and Ido Kotler, made it to the final rounds of the general Open competition, which includes native English speakers from around the globe. They competed against some of the best universities in the world, including Oxford University and Harvard University.

“Debate is not only a sport, but rather a unique tool for the development of logical and rhetorical capabilities,” said Shulmann. “It exposes students to a wide range of opinions and challenges their personal stance, as well as gets them used to truly listening to the other side and really answering the heart of the issue instead of the heart of the person.” Shulmann said he wishes to “encourage a different discussion culture, one that allows us as a society to hold a real dialogue regarding disputes.”

Hebrew University debate team chairman, Naama Weiss, said that the Israeli teams are “used to meeting students at the competitions from countries hostile towards Israel.” However, Weiss explained that they “never felt different.” “We actually become friends with them,” Weiss said, regarding facing political adversaries in competition. “It is important that we hold discussions with those that disagree with us, as well.”

Israeli debate teams have achieved multiple successes this year. The same team of Even-Chen and Kotler won the European Universities Debating Championship in Serbia last August in the English Second Language category. In that same competition, Noam Dahan and Tom Manor, also of Tel Aviv University, won the Open competition. In addition, the Israeli national high school debate team won the EurOpen debate competition in Stuttgart, Germany in November of last year, going undefeated for all 12 rounds of the competition.