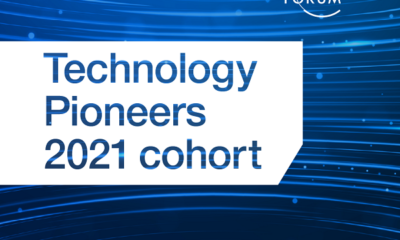 Five Israeli companies have been selected to be this year’s World Economic Forum’s Technology Pioneers, a group of 100 new tech firms chosen out of hundreds of candidates in the fields of artificial intelligence to fintech and healthcare that will become part of a community of firms that are “are poised to have a significant impact on business and society.”

“The 2021 cohort of Tech Pioneers includes many future headline makers at the forefront of their industries,” said Susan Nesbitt, head of the Global Innovators Community, World Economic Forum, in a statement. “These companies show great potential to not only shake up their industries but offer real solutions to global problems. They’ll bring great value to the World Economic Forum’s mission of improving the state of the world with their participation in the Technology Pioneers community.”

The World Economic Forum’s Technology Pioneers is a community of early growth-stage companies from around the world that are involved in the design, development and deployment of new technologies and innovations, “and are poised to have a significant impact on business and society,” according to the Forum’s website. The Forum recognizes a limited number of companies each year as Technology Pioneers and includes them in its initiatives, activities and events, “where they bring cutting-edge insights and novel perspectives to world-critical discussions.”

Among the five Israeli startups selected is CropX, the Israel-based company that produces do-it-yourself farm management technology based on real-time soil data.

Founded in 2014, CropX has developed a hardware and software system that uses the power of big data, machine learning and cloud technology to boost agricultural output. The hardware part of the system is mushroom-like sensors that are installed in the ground by the farmers themselves, who are guided in their placement by CropX’s mobile app.

Once installed, the sensors automatically collect data on the soil — like moisture, salinity and temperature — and send it to the cloud, which gives the farmers real-time actionable information via the app. This gives the fields a “voice,” the company says, and helps farmers set out optimal irrigation, fertilization and other plans for their fields, so they can save on water, fertilizer and energy while conserving resources and protecting the environment. The firm says it aims to become the “autopilot of the farm.”

“We’re excited to welcome CropX to our 2021 cohort of Technology Pioneers,” said Nesbitt. “CropX and its fellow pioneers are developing technologies that can help society solve some of its most pressing issues. We look forward to their contribution to the World Economic Forum in its commitment to improving the state of the world.”

The other Israeli firms selected as pioneers this year are:

MyndYou, a Herzliya-based healthcare startup founded in 2016 that developed an artificial intelligence-based virtual care assistant that helps care teams help seniors by managing the social impact of health, chronic conditions, medication adherence and fall prevention, among others; and

Phinergy, a Lod-based clean-energy startup founded in 2010 that developed metal-air technology that creates clean energy by extracting power contained in metals such as aluminum and zinc.

For the first time in the WEF Pioneer community’s history, over 30% of the cohort is led by women, a WEF statement said. The firms come from all around the world, extending their community far beyond Silicon Valley. This year’s cohort includes startups from 26 countries, with the UAE, El Salvador, Ethiopia and Zimbabwe represented for the first time.

The diversity of the companies extends to their innovations as well. 2021 Tech Pioneer firms are shaping the future by advancing technologies such as AI, IoT, robotics, blockchain, biotechnology and many more.

Technology Pioneers have been selected based on criteria that include innovation, impact and leadership as well as the company’s relevance with the World Economic Forum’s Platforms.

This year’s companies will join a group of alumni that include many household names, such as Airbnb, Google, Kickstarter, Mozilla, Palantir Technologies, Spotify, TransferWise, Twitter and Wikimedia.

Israeli firms selected by the World Economic Forum in previous years include Innoviz Technologies, a maker of light detection and ranging (LIDAR) sensors for self-driving cars; WaterGen, a startup that transforms air into drinkable water, Utilis, a firm that uses satellite technology to detect water leaks; Aleph Farms, which grows meat cuts directly from cattle cells; and Optibus, a software-as-a-service platform that seeks to enable public transportation providers to give users a service that is akin to a taxi ride but at public transportation prices.

The World Economic Forum is an International Organization for Public-Private Cooperation and deals with political, business and other leaders of society to shape global, regional and industry agendas.