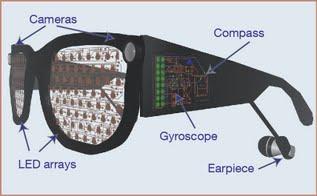 An Israeli startup has developed smart eyeglasses that project images directly onto the retina of the eye. Modi’in-based firm Eyejets claims its new device – dubbed the EyeVis (EV) – will replace smartphones soon.

Unlike other contenders in the smart glasses category that are currently available, such as Google Glass, the EV uses a projection system known as a virtual retinal display (VRD), which projects images or content generated by a computer, TV, or smartphone, directly onto a wearer’s eye rather than a screen. The technology is coupled with a proprietary eye tracking unit that enables the projection to be located precisely in the center of a person’s field of vision based on their eye movements.

According to EyeJets CEO Col. (res.) Edu Strul, the device is unlike any other available on the market today. “For most companies that have developed smart glasses or augmented reality glasses, the image or display is on the lens,” Strul told The Media Line. “We developed eye tracking which follows your eye movement. This means that if you watch a movie you’ll see it very well because the projection is all the time directly in the center of the field of view. Nobody did it [before].”

Strul is an aerospace engineer who previously served as chief of the aircraft engineering and acquisition programs department in the Israeli Air Force.

EyeJet was founded by both Strul and Dr. Joshua Gur, who is serving as chief technology officer and has 40 years of experience in the optical technology arena. The duo was later joined by Chief Medical Officer Dr. Isaac Lipshitz, an ophthalmic surgeon who specializes in the field of intraocular optics and intraocular implantable devices.

While other companies in the past have managed to develop VRD-based systems, the images projected would either be off-center or out of focus due to a lack of eye movement tracking capabilities. EyeJets’ new patent-protected technology corrects this shortcoming.

The EyeVis, which the startup is hoping to launch by the end of next year, will feature a range of smartphone capabilities, including sound, camera options, and a virtual keyboard that will enable users to write. It will also be compatible with existing smartphone apps.

The smart glasses use a miniaturized array of low-intensity lasers, which the company says is safe for everyday use. “When we presented it to the Israel Innovation Authority the first question was about safety,” Strul said, adding that the new device meets the safety standards set out by studies on VRD lasers that were previously carried out by the US military.

The EyeVis leaves users’ peripheral vision active so that they can always see what is going on in the real world. Furthermore, the size and transparency of the picture projected onto the retina can be adjusted, Strul said. People requiring regular eyeglasses will also be able to wear the smart glasses with a prescription if needed.

VRD is not a new concept. The basis of the technology was originally invented by the Nippon Electric Company in the 1980s and later developed at the University of Washington in the early 1990s. However, VRD has until now mainly seen applications in the medical and military fields.

Some tech giants have also attempted to launch VRD-based smart glasses in recent years. In 2018, for instance, Intel announced Vaunt, smart glasses that were designed to resemble conventional glasses. The firm abandoned the project after only a few months.

Today, EyeJets has a demo device and is in talks with leading eyewear and global tech companies to speed up development. “It’s a demo that shows the strength of the patent and we have to develop it towards a prototype,” Gur, the CTO of EyeJets, told The Media Line. “It will take a year or so.”

Gur added that the company is aiming to have the glasses be as affordable as possible and cost less than a high-end smartphone. “We think people will have a great experience while looking at the display,” Gur said. “Nobody has tried our method [before].”