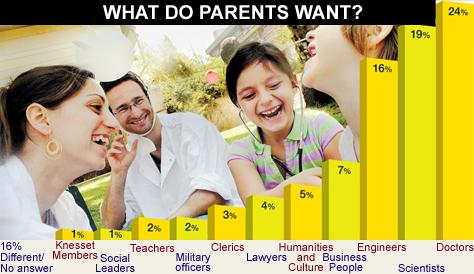 Poll conducted to mark National Science Day finds that parents would least like their children to become entertainers or politicians.
In a survey conducted to mark National Science Day on Wednesday, doctors scored the highest when respondents were asked what profession they would like to see their children or grandchildren engage in.

Some 74 percent of those polled said they didn't think the government invested enough in academic research. Only 9 percent thought the state spent too much money on research. The survey of 528 Israelis was conducted at the end of last year for the Science and Technology Ministry's National Research and Development Council by Mina Tzemach of the Dahaf polling institute.

National Science Day is marked on the birthday of Albert Einstein. As part of the commemoration the Science Ministry has organized a program of visits by scientists on Wednesday to the country's pre-schools, in an effort to promote science education from a young age.

Among the results of the poll was a finding that, when it comes to scientific and technological achievements, 79 percent of respondents thought, in relation to its size, Israel did as well or better than most other developed countries.

The staff who developed the survey acknowledged that in such surveys there is frequently a bias in favor of answering in a way that will be viewed positively by others, and this may have explained some of the support for government funding of research. In contrast to some of the other findings, however, support for the idea of the importance of technological knowledge actually slipped since a similar poll in 2009, in large measure due to the waning support for it among Israeli Arabs.

When probed about their attitudes about the prestige of specific professions and occupations, the overall group of respondents gave the highest marks to physicians (with a score of 8.86 out of 10 ) followed by scientists. Engineers came third in the rankings, followed in descending order by teachers (who had been in 11th place in a 2009 survey), army officers, senior business executives and those involved in intellectual and cultural pursuits. The lower end of the list featured entertainers, religious figures, and at the very bottom, Knesset members, who scored 5.93 points out of 10.

The rankings varied among the respondents, however. Women, for example, gave higher marks to army officers than men did, and also rated intellectuals and those involved in culture more highly. When it comes to Knesset members, religious, traditional and ultra-Orthodox respondents had a more favorable view than did secular citizens.

When asked more specifically which occupations they would prefer for their children or grandchildren, the top spot that doctors garnered was followed by scientists and engineers. At the bottom of the list was the prospect that a child or grandchild would become a journalist, an athlete, a leader on social issues, a Knesset member, a police officer or an entertainer.

When it came to responding to the profession that contributes the most to the country's strength, doctors again came in first, with a score of 9.59 out of 10 (although Arab respondents on average only rated doctors at 8.42), followed by senior scientists at institutions of higher education. Third on the list was senior technology and engineering personnel in the business sector, followed by senior army officers.