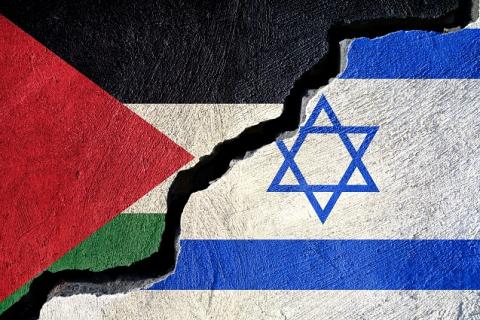 The Israeli-Palestinian conflict reignited this week in the worst violence since 2014, the last time Israel and the militant group Hamas, which rules the Gaza strip, came to blows. Since Monday, dozens of Palestinians have been killed and hundreds injured in Israeli air strikes, while six Israelis have been reported dead, and many more injured, in rocket attacks launched from Gaza. The crisis has also sparked riots and violence in the streets of Jerusalem, the West Bank, and mixed Jewish-Arab towns throughout Israel.

This wave of destruction has raised the specter of a return to all-out war between Israel and Hamas and, at least for the moment, dashed President Biden’s hopes of putting the Middle East on the back burner in his foreign-policy plans. Israel and Hamas have both taken steps to escalate the conflict, with Israel rolling out an expansive military operation in Gaza and the militants firing hundreds of rockets, including anti-tank missiles, some toward Tel Aviv and the suburbs of Jerusalem.

Media reports have muddled the details of how this latest conflict began, since a full explanation of the roots of the crisis is hard to pack into a news article. The spark, as has often been the case, was East Jerusalem — specifically, Israel’s determination to change its demographics and make it inviable as the prospective capital of a future Palestinian state. An ongoing effort to evict several Palestinian families from the Sheikh Jarrah neighborhood just north of the Old City led to protests and fighting between Palestinians and Jewish settlers over the past few weeks, and things began to spiral out of control over the weekend.

Monday was Jerusalem Day, a contentious Israeli holiday celebrating the anniversary of the capture of East Jerusalem in the 1967 war, which reunited the city under Israeli control. Jewish nationalists like to celebrate by marching through Jerusalem’s Old City waving flags and chanting “death to Arabs,” to the understandable chagrin of the many Arabs who live there. To make matters worse, the Israeli Supreme Court was expected to rule on Monday on the Sheikh Jarrah evictions. (Raja Shehadeh explains the full complexities of that situation at The New Yorker.)

Authorities rerouted the Jerusalem Day parade, and the court postponed its ruling to avoid inflaming the situation. But tensions were already running high, and they came to a head at Al-Aqsa Mosque. Saturday was Laylat al-Qadr, (“Night of Destiny” or “Night of Power”), the holiest night on the Islamic calendar, which comes near the end of the fasting month of Ramadan, and tens of thousands of Muslims came to the mosque to pray. Al-Aqsa Mosque and the adjacent Dome of the Rock are two of Islam’s three major holy sites; both are located on the Temple Mount, which is equally holy to Judaism. The presence of Israeli police in the Al-Aqsa compound often leads to conflict, but things veered out of control over the weekend. After evening prayers on Friday and Saturday night, hundreds of Palestinian protesters were injured in fierce clashes with Israeli riot police, who had tried to block access to the mosque and fired rubber bullets on protesters. Conflict broke out in Sheikh Jarrah as well.

Hamas then launched hundreds of rockets into Israel on Monday in retaliation for what it described as Israeli provocations. Most that made it into Israeli airspace were intercepted by Israel’s Iron Dome missile defense system. But for Israel, the intended targets mattered. Many of the rockets were aimed at Tel Aviv, Israel’s densest population center, and others were fired in the direction of Jerusalem, landing on the outskirts of the city. Israeli Prime Minister Benjamin Netanyahu on Monday described the targeting of Jerusalem as crossing a “red line” and vowed to “respond with great force.” The IDF, Israel’s armed forces, responded with airstrikes against militant bases in Gaza, which are embedded in civilian areas and hard to bomb without putting innocent people at risk. Since then, the back-and-forth of rocket attacks and airstrikes has continued to escalate.

On the surface, this looks depressingly similar to previous spates of violence in Israel and the Palestinian territories. What’s different this time, as Slate’s Joshua Keating observes, is that there is no longer any semblance of a “peace process” to return to when this round of violence abates. The process begun in Oslo nearly three decades ago is effectively extinct, as is the center-left pro-peace camp in Israeli politics. Israeli society has moved sharply to the right, becoming more religious, more nationalistic, and more openly hostile toward Arabs. To the extent that the Palestinians still want to make a lasting peace deal, they lack credible representatives and a willing partner for that conversation.

The present state of affairs is indicative of how successful Netanyahu has been at undermining any prospects for peace. He has never believed peace with the Palestinians, much less an independent Palestinian state, to be a worthwhile goal for Israel. His security policy has been based on managing the conflict — accepting a perpetual state of war with Hamas’s failed pseudo-state in Gaza and sporadic unrest in the West Bank — not resolving it. His foreign policy has been grounded in the theory that the Arab states are tired of pretending to care about the Palestinians, so Israel can normalize relations with most of its neighbors on the basis of their shared enmity toward Iran, meanwhile maintaining the status quo of the occupation.

The U.S., the only country that has been able to act as an effective international broker in this conflict, has been disengaged from the peace process for years. The Trump administration’s Middle East policy — led by diplomatic dilettante, Netanyahu family friend, and all-around shandeh fur die goyim Jared Kushner — was focused not on making peace so much as helping Israel rub its de facto victory in the Palestinians’ faces. Trump’s “Abraham Accords,” the historically significant opening of relations between Israel and the U.A.E. and Bahrain (and later Sudan and Morocco), were essentially Netanyahu’s theory put into practice. The latest violence is now testing the resolve of these Arab countries to normalize with Israel, as the Palestinian issue is proving not so irrelevant as it seemed over the past few years.

Biden formally supports a two-state solution, but he has not expressed much interest in making progress toward that end. The president had entered office hoping to de-prioritize the Middle East in favor of more pressing foreign-policy concerns such as China, Russia, Latin America, and Europe that align more closely with core American strategic interests. The unfolding crisis is forcing him to pay attention to a problem he clearly doesn’t believe he can solve. Considering the facts on the ground, he’s probably right.

One reason why the peace process is vegetative, if not yet legally deceased, is that the parties involved in the process lack the credibility, legitimacy, and interest to pursue it. The gerontocratic Palestinian Authority, led by 85-year-old president Mahmoud Abbas, is an “authority” in name only. Abbas recently announced that he was indefinitely postponing the first Palestinian elections in 15 years, ostensibly because Israel was holding up efforts to allow Palestinians in East Jerusalem to vote. That may be part of the story, but it is also true that Abbas’s Fatah party was lagging in the polls and likely to lose seats to Hamas in the Palestinian legislative council. From this angle, Abbas’s dispute with Israel looks like a pretext for putting off an election that was likely to go poorly for him. Hamas, meanwhile, is in no way invested in reaching an accommodation with Israel.

On the other side, Israel has held four rounds of inconclusive elections in the past two years that have failed to form a durable governing coalition. Netanyahu’s Likud party, in league with far-right nationalist and religious Zionist parties, keeps coming up just short of a majority in the Knesset, as does the opposition: a motley amalgam of center-right parties plus the remnants of the center-left and left who have nowhere else to go. Would-be kingmaker parties have refused to join either side. In the current round, that party is the United Arab List, an Arab-Israeli Islamist party that broke away from the Joint List of mostly left-wing Arab parties in this year’s election. The UAL has been negotiating with both sides, though some of Netanyahu’s virulently anti-Arab allies have ruled out working with any Arab party, much less an ideological cousin of Hamas. The main opposition parties, Yesh Atid and Yamina, have been in talks with the UAL that are now suspended amid the violence.

In the meantime, the chaos stands to benefit Netanyahu politically. The long-standing PM, currently on trial for corruption, is technically only serving in a caretaker role until a governing coalition is formed (if one is formed at all). He is in the most tenuous and vulnerable political position of his career. A renewed war with Hamas could be a political lifeline, not only because breakdowns in law and order tend to benefit the far right, but also because Netanyahu has cultivated an image of himself as the only man who can protect Israel from its various internal and external enemies. By preventing his opponents from forming a government and ousting him from the prime ministry, the crisis effectively keeps Netanyahu in power longer. Perversely, that gives him an incentive to drag it out.

And indeed that may be his plan. “This campaign will take time,” Netanyahu said on Wednesday. “Israel is not preparing for a ceasefire,” Defense Minister Benny Gantz added. “There is currently no end date for the operation.”

The Israeli leadership may have a national-security rationale for ensuring that Hamas pays a heavy price for its latest rocket barrage. But the PM has unmistakable political incentives to do so as well — and he will likely pay no price for responding forcefully, no matter how many Gazans are killed. Those facts temper any hope for a quick resolution to this crisis.

Amid this chaos, Biden has no choice but to act, and his administration is taking steps to try to mediate the conflict. Deputy Assistant Secretary of State for Israeli and Palestinian Affairs Hady Amr left for Tel Aviv on Wednesday, Axios reported, and national-security adviser Jake Sullivan has been speaking to his Israeli and Egyptian counterparts (Egypt is the go-to intermediary with Hamas, which neither Israel nor the U.S. will deal with directly). Secretary of State Antony Blinken also spoke with Israeli Foreign Minister Gabi Ashkenazi, not yet pressing Israel to halt its Gaza operation but expressing Washington’s desire for de-escalation.

With Biden’s attention elsewhere, his administration appears to have been caught flat-footed by this seemingly sudden crisis — even though it has been building for weeks. The president may not want to focus his foreign-policy resources on the Middle East, but as past presidents who have tried to step back from the region have learned, it has an uncanny way of drawing the U.S. back in.

Biden might want to get used to the idea that the Israeli-Palestinian conflict can’t be ignored: Netanyahu’s mainstreaming of violent anti-Arab Kahanists in Israeli politics, Palestinian disillusionment, and the crumbling of the two-state framework all make a larger, deadlier conflict in Israel and the occupied Palestinian territories increasingly likely. The current crisis might not be “the big one,” but a third intifada or something like it seems almost inevitable, as the Palestinians realize that neither Israel nor their own leadership is willing or able to give them the self-determination they seek. The situation is grim, and it doesn’t look likely to get better anytime soon.