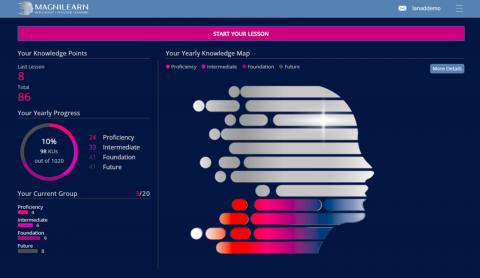 “How did you do on your Gaokao exams?” That phrase might not trip off the tongues of most Western students, but for high schoolers in China, it’s their key to acceptance into university – and to future success.

What tips the balance? Proficiency in English. And for most Chinese students, that’s a tough bar to meet. “While 22% of the Gaokao is English itself, up to 50% of it is dependent on your ability to understand the language,” explains Howard Cooper, CEO of MagniLEARN, an Israeli startup applying artificial intelligence to teaching English online.

“There is an incredible recognition in China that this is the gateway to the future. Four hundred million students are learning English in China, yet only 2% get to fluency. Worse yet, there is a shortage of 100,000 English teachers in the country.”

In the era of COVID-19, with students and teachers separated by social distancing and free movement in parts of China still limited, the need for an online approach has gained even more traction.

MagniLEARN uses natural language processing (NLP) and artificial intelligence to build a “linguistic engine” that understands where students are struggling. The software can then adapt its lessons to match individual needs, rather than the all-for-one approach typical in both online and frontal language learning.

“The teaching is tailor-made, based on dynamically generated exercises,” Cooper tells ISRAEL21c. “The software’s linguistic engine builds, stores and updates a personal ‘knowledge map’ for each student.”

Set up is easy – there’s nothing to download as MagniLEARN is entirely web and smartphone based. MagniLEARN exercises require writing free-form answers rather than answering multiple-choice questions. “We give students a sentence to translate, they type it and the NLP analyzes the text,” Cooper explains.

The software can discern if a student “got this and that right but got the word order wrong” or if the present tense is well understood but past-tense usage is shaky. Performance on one lesson influences how the next lesson unfolds.

Cooper likens the method to a “personal tutor teaching language to a child. We understand what is correct, what is nearly correct and provide feedback and then reinforcement as the student learns proper English. We weed out all the things you don’t need to learn because you already know them.”

An example: “If you write ‘I am a boy quickly,’ we understand that you have an adjective problem but that your vocabulary is good,” Cooper says. Working at the level that’s appropriate for each student is different than in a classroom “where the teacher has to teach to the lowest common denominator and everyone else will be bored or lost.”

Faster by a factor of 3

Cooper says that using MagniLEARN can speed up a student’s acquisition of English by “at least a factor of three when compared to existing methods.” That caught the attention of Jerusalem-based crowdfunding investor OurCrowd, which accepted MagniLEARN into its Labs/02 seed-stage incubator.

While the COVID-19 crisis has given students extra time at home to learn all manner of subjects, MagniLEARN is not geared to individual students. The software is meant to be used by English-language schools at a cost of around $1 per student per month.

China mandates English language learning from the third grade on. That adds up to more than 2,000 hours by the time a student reaches university. This has led to overcrowding with up to 50 students per classroom and, as a result, a booming afterschool market of private tutoring companies. China-focused market research firm Daxue Consulting reports that 73% of Chinese parents spend the equivalent of nearly $1,600 a month on supplemental English classes.

Yet few teachers in China are native English speakers. So while immersive learning – the classic Hebrew-language ulpan style – “is probably the best way, if you’re in Nanjing, China, your access to English-speaking people is close to zero,” says Cooper.

A whirlwind tour last year led by the Israel Innovation Authority brought MagniLEARN to the attention of investors and partners in Beijing, Changzhou and Shanghai. (The company won second prize for AI innovation during the third annual China-Israel Innoweek Conference in Beijing.)

Cooper is looking into other parts of Asia as well.A pilot with online education company Embibe in India will be launched later in 2020, coronavirus-permitting.

MagniLEARN grew out of the work of Prof. Ari Rappoport, a Hebrew University expert in NLP and AI. Cooper calls him “the Rosetta Stone of language acquisition.” Hebrew University PhD graduates Lana Tockus and Michal Etzion are the company’s vice presidents of product and R&D, respectively.

The three originally began a paid pilot with 1,600 students in Brazil. But the company was at that point bootstrapped and running out of money, so the founders instead linked up with Cooper and joined the Labs/02 incubator.

MagniLEARN raised $1.3 million in a seed round led by Labs/02 with participation from the Israel Innovation Authority, Motorola and Reliance Industries of India (which is an investor in Embibe). Cooper headed up Intel’s Jerusalem Marketing Division after making aliyah in 1994. He also worked for Intel Capital in Israel and the United States, which led to many business trips to China.

Did Cooper learn any Chinese along the way? “I was exposed to a lot of words,” but no, he admits, he’s not picked up the language. “Chinese is quite a challenge!”