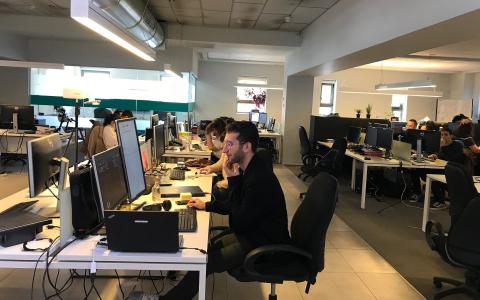 Israel’s high-tech industry, the main engine of the economy, experienced welcome growth in 2019 with tech workers making up 9.2 percent – some 321,000 employees – of the national workforce and representing an eight percent increase over 2018, according to a joint report released on Wednesday by Start-Up Nation Central (SNC) and the Israel Innovation Authority (IIA).

The rate of workers employed in the high-tech sector was locked at about eight percent for about a decade previously. At the same time, the shortage of tech workers rose significantly over the past few years, with an estimated 18,500 open tech positions in the industry as of July 2019 – an increase of eight percent compared with July 2018.

According to the report, 40 percent of open positions in July 2019 were in the software and product infrastructure, with cybersecurity and data scientist roles leading the charge with high demand. And seven out of 10 employees in the high-tech industry were in tech positions (compared to one out of two in 2012), with a significant increase in this rate when employed in multinational corporations.

“The macro view of this report shows that there are two very positive trends,” Professor Eugene Kandel, a prominent Israeli economist and the CEO of Start-Up Nation Central, tells NoCamels in a phone interview. “First, we see a high demand for Israeli tech talent, and second, we see an increase in the workforce in the industry which tells us that more people are accessing good, high-paying jobs.”

The average salary in the high-tech industry (including both technological and non-technological roles) in 2018 was NIS 22,479 ($6,5000) per month, compared with an average wage of NIS 9,345 ($2,700) in the rest of the economy. “The not-so-good news is that the demand is outpacing the supply,” Professor Kandel says, “but there’s a sense that the rate at which the shortage [of tech employees] is increasing has slowed.”

Naomi Krieger Carmi, head of the Societal Challenges Division at the Israel Innovation Authority, tells NoCamels that the report “gives an important snapshot of where we are today where the number of people employed in the industry is starting to rise after we were stuck for many years at eight percent.” “The demand for jobs in the sector is high and there is concern but long-term plans are starting to have an effect. We see more inclusion of people from the ultra-Orthodox [haredi] and Arab communities in the sector and more recruitment of people with more diverse training talent like coding bootcamps,” says Carmi.

The rate of women employed in the sector, meanwhile, is at a standstill at about 30 percent with just 22 percent for technology positions and 18 percent for tech management roles, according to the report which also showed that the higher the age group, the smaller the share of women in high tech, especially between the ages of 25-44 when some women consider motherhood and become parents.

Carmi says the bulk of the problem “starts early, in high school and sometimes even earlier where just 1/4 of girls complete matriculation in computer science or math, and this carries forward into the industry.” “There is so much more work to be done on this issue and we continue to focus on it,” she says.

The report is based on data from the Central Bureau of Statistics (CBS), the Israel Innovation Authority, the Planning and Budgeting Committee at the Council for Higher Education, Start-Up Nation Central, and a survey sent to a sample of high-tech companies in July 2019 in collaboration with Zviran. Over 300 high-tech companies with more than 90,000 employees participated in the survey.

A stark warning for the Israeli tech industry

Kandel warned in his opening remarks in the report that a failure to provide a solution to the shortage in technological human capital would result in the Israeli high-tech industry not being able to grow at a satisfactory rate and losing its driving force as a growth engine.

“The high-tech industry is the country’s most productive sector, and without the inclusion of dozens of thousands of new workers from diverse populations and geographies, this industry will continue to disengage from the Israeli economy – an outcome whose potential damage to the Israeli socioeconomic fabric cannot be underestimated – to the point where the high-tech industry would be a foreign element in Israel,” Kandel wrote.

“The same innovative thinking that has led Israeli high-tech to its impressive achievements can also assist in solving the industry’s human capital challenge,” he said. Kandel tells NoCamels that Israel “doesn’t have the luxury of ignoring any community in this sector,” adding that there is “no silver bullet – we have to tackle it from all angles.”

Carmi, too, says that a range of solutions must be applied to handle the workforce shortage as there is “no magic solution.” She lists several ways to do so including the coding bootcamps which she says are a “good retraining opportunity for those who already have a background in biotechnology and engineering for example,” and generally increasing the number of graduates with degrees in math and computer science, especially among those from diverse communities.

“The ‘bring a friend’ referral method was an efficient way to recruit employees in the early decades of Israeli high-tech, but now there is a clear need to break past familiar boundaries and recruit employees from diverse backgrounds as well, beyond [the IDF’s] 8200 Unit or university graduates,” Kandel said in a statement accompanying the report. “Policies encouraging women and other sectors of Israeli society to join the unprecedented success of the high-tech industry must be set. Companies that fail to adopt this approach will restrict themselves to a limited supply of employees and miss out on quality talent pools,” he warned.

According to the report, there appears to be an issue with employing persons with less experience (with up to two years) which the report refers to as “juniors,” and retaining employees with a noted voluntary departure rate of 10.2 percent among high-tech employees in 2018. “We need to start thinking about how to increase the time people stay with one company, perhaps give them incentives for starting three years at least, and combine that with funding for training for junior roles” Kandel explains to NoCamels.

The two are related. “If employee turnover is high, companies may not want to fill a role with a junior employee and spend time and money training them. We need to address both issues,” he says.

Carmi agrees, telling NoCamels that the government can perhaps help companies overcome these hurdles by funding training and transition periods. “But there needs to be a combined effort from the government and from the industry,” she says. “Large companies have figured this out, they know they can spend the time on training new people, but smaller operations feel that they don’t have time to lose and need people with deep experience,” Carmi explains.

Another sore spot is the intensification of the offshoring trend where companies, in an effort to address the shortage, open centers abroad. Of the local companies that participated in the survey, 27 percent reported offshoring centers, compared with 22 percent in the previous survey (published in 2018). Similar to last year, half of the companies that reported offshoring activities had established them in the last two years, which seems to indicate that this phenomenon is intensifying, according to a summary of the report. “On one hand, it is a sign of a healthy industry, but we want to make sure that core R&D stays here and we need to use resources to address this,” Carmi says.

Kandel explains that the offshoring trend is an understandable solution that many companies have found to address the workforce shortage. “It is a symptom of what is happening here. Companies have three options: close up shop, leave and set up elsewhere, or stay and outsource some of the work. There is the fourth option of hiring locally [to address the shortage] but we are not there yet,” Kandel tells NoCamels.

According to the report, the main solution remains to “increase the supply of employees, first and foremost by training additional tech employees.” “Academic institutions remain the primary gateway to the high-tech industry…Accordingly, the Council for Higher Education is now conducting a program that provides incentives to encourage an increase in the number of college and university students enrolled in high-tech studies. The number of students is projected to reach 11,000 by 2022 – an increase of over 40 percent compared to 2016,” the report reads.