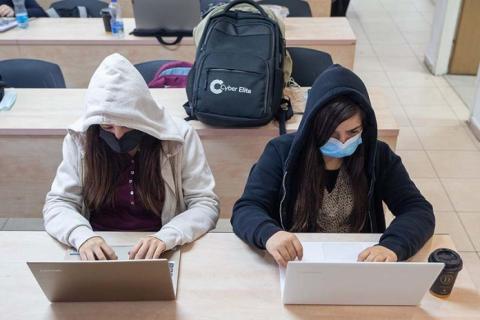 Israel’s defense and education ministries launched a program about two weeks ago for gifted students that has the involvement of the Mossad intelligence service, the Shin Bet security service and the IDF. The involvement of the defense establishment in the education system, although not new, has raised some eyebrows when it comes to the program.

At an initial online session to promote the program, one speaker was identified as Erez, the head of a department in the Mossad. “Israel needs good fighters and technological superiority. We have no choice. We have to be in first place. Second and third place on the podium are not enough,” he said.

Speaking through a darkened screen, he said the new program, which is called Odem, is seeking to enlist 14- and 15-year-olds in a long-term program that includes engineering studies and service in the Mossad’s technology unit, the Shin Bet security service and the Israel Defense Forces. The participants in the program will have “enormous influence,” the Mossad representative said.

Students who finish the program will be in it for 12 years. The curriculum includes attending high school at a boarding school in Katzrin in the Golan Heights; a degree in electrical engineering from the Technion Israel Institute of Technology; and a six-year stint in the army. Last week, initial screening for the program began for ninth grade students. The first class of 40 students is slated to begin the program next year.

The speakers in the online promotional session repeatedly spoke about “technological leadership,” “an elite program” and “maximizing one’s potential,” along with a promise that the program would help the students be the best version of themselves. The same language also features in promotional information about Odem on social media.

At the promotional session and on the program website, there is no mention of the goal of the project or specifics about the areas of study. But they were hinted at in an invitation issued about two years ago to potential management candidates of the program. Together with Rafael Advance Defense Systems and other entities that were not specified, the program is to focus on developing “autonomous systems,” the invitation stated.

Controversy regarding the use of weapons that can, in real time, select and attack targets without human intervention were pushed aside, as was whether it’s appropriate to enlist teenagers in the effort. “Robot fighters can be monstrous objects. A high level of ethical interpretation is required to develop them,” said Prof. Yagil Levy of the Open University, who studies social and political aspects of the army. “Secluding people in remote boarding schools will create the suitable atmosphere that will spare unnecessary questions or reliance on civilian systems.”

Dr. Natalie Davidson of the law school at Tel Aviv University called the program “a more sophisticated and subtle military use of children.”

The Defense Ministry rejected the claims.“There is major room for dealing with the ethics of autonomic systems,” it said, citing Israel’s Iron Dome missile interception system and the Trophy system used to protect tanks. “From our standpoint, they already save lives today and will save many lives in the future among our soldiers, while defeating the enemy with minimum casualties and minimum harm to non-combatants.”

The Odem program is also included in the plan presented at a cabinet meeting several weeks ago to develop the Golan Heights. But work on it has been underway for several years. The Defense Ministry’s technological weapon division is leading the program, with the participation of the Education Ministry’s department for gifted students.

In the online promotional session Odem’s program’s director, Ronen Keidar, said that the two government ministries were joined in the program by the army, the Shin Bet and the Mossad, as well as leading defense industries, foundations and private entities.

The army’s involvement in the education system is nothing new. Over the years, it has ranged from the paramilitary Gadna program to the design of the Arabic instruction, but such open cooperation with the Shin Bet and the Mossad is still considered extraordinary – and the involvement of private entities in the schools is also controversial. The Defense Ministry declined to identify the other public or private entities involved in the program.

Odem grew out of the army’s Talpiot program, but unlike Talpiot and other programs in which participants defer their army service, admission to Odem occurs prior to 10th grade and the selection process takes place even earlier.

At the promotional session, Keidar went into detail regarding the abundant advantages of the program: a personally designed curriculum – directed at an electrical engineering degree but also allowing “courses and experiences in other worlds of content,” a large support team in high school and at the Technion, personal support during the participants’ army service and networking among the program’s graduates – and all at no charge.

In keeping with the target audience, Keidar described the Katzrin campus as a mix of Harry Potter’s Hogwarts school and “The Greenhouse,” a television series about a boarding school for gifted future leaders. “Don’t miss the opportunity to mold your future the way you would want it,” Keidar urged.

From the Defense Ministry’s standpoint, such a process of growth can only be achieved in a setting that is removed from family and friends. As Keidar put it to parents: “It’s important to us that the relationship with the family be good and that the parents are involved and informed, but we want to make it possible [for the students] to understand and immerse themselves in the experience.”

According to the program’s educational adviser, Ida Kadosh, the program is “excellent ground in which all the processes of development we want to promote can take root and blossom.”

The admission process is slated to take about six months. The initial contact is through text messages to parents, on social media and by other means. That’s followed by cognitive testing, interviews and a course at the Open University. The high point is a three-day experience that “simulates life at the boarding school.”

Neither Keidar nor any of the other speakers gave details as to the nature of the “significant roles” the graduates are to play in the security forces, nor does the program’s Facebook page. Instead the focus is on presenting an ideal school.

“Autonomous systems is a general name for weaponry which is based to some extent on artificial intelligence and that operates according to protocols defined for them,” the Open University’s Prof. Levy said. “There is a major worldwide ethical debate as to whether the use of such systems shifts decisions, and therefore responsibility, from a person or a government to an automatic system, but in Israel, such questions interest almost no one.”

According to Levy, Odem offers an enticing program: high-level education, personal attention and free tuition in return for development work that he said could be highly murky. “With boarding school education, it’s easier to create the necessary conditions for this. It’s a sort of human engineering that can end in the development of ethical monsters,” he warned.

The program will attract mainly students who “cannot obtain an elite education” on their own, he predicted. “Such a track towards advancement is particularly important in outlying areas.” The Defense Ministry sees things somewhat differently.

“Odem will provide an equal opportunity to students from all over the country, as a part of the defense establishment’s goal to have 30 percent of those drafted into technological units come from outlying areas. The program develops a world of possibilities that unfortunately are not available to everyone,” the ministry said.

According to Dr. Eran Tamir of Tel Aviv University’s School of Education, many studies show that the brains of teenagers are not fully developed, particularly with regard to value-based issues and complex decision-making, and they continue to develop into the mid-20s. High school students, have a limited ability “to deeply understand the meaning of decisions that they will be required to make, in designing algorithms to operate autonomous weapons systems, for example. Odem therefore raises a raft of moral and ethical problems,” Tamir said.

In response, the Defense Ministry said students will join the program “of their own free will, with the support of their parents,” and that the program is “committed to the students all along the way. They won’t be required to make decisions about their future in ninth grade, and those who don’t complete the program will return to the high schools from which they came.”