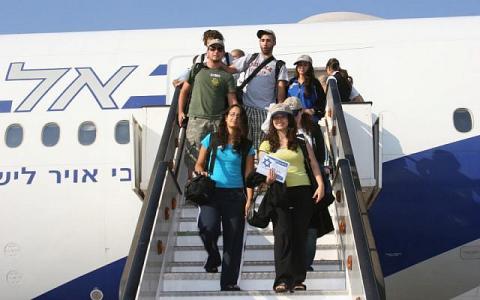 "The government isn't taking Russian aliyah seriously," activists involved in promoting aliyah and the absorption of olim from the Former Soviet Union said on Sunday. The Million Lobby, an organization representing young Russian-speaking immigrants in Israel, launched a campaign calling Prime Minister Yair Lapid to "wake up" and understand the magnitude of the failure of the absorption of these olim.

"Prime Minister, it's time for you to wake up, we must take the absorption of Aliyah seriously!" a Facebook post stated. "8 months have passed since the beginning of the war and over 40,000 immigrants from Russia and Ukraine have arrived in Israel; many thousands are planning to arrive in the coming weeks following the conscription in Russia. Despite the state of emergency, the State of Israel is not preparing well enough to absorb the immigrants and we are heading for a crisis in the absorption of the aliya that will exceed 10 times the problems that existed in the absorption of the aliya in the 90s," they harshly wrote.

"Instead of Prime Minister Lapid setting up an urgent national committee to promote the absorption of Russian aliyah and investing hundreds of millions, this [subject] unfortunately does not interest him," CEO of The Million Lobby Alex Riff told The Jerusalem Post on Sunday.

She argued that the NIS 90 million budgeted by the government for emergency aliyah is too small and not relevant to the long-term difficulties of immigration.

The Israeli government has approved a number of steps in order to promote the expedited aliyah of Russians who qualify to make aliyah to Israel according to the Law of Return. The government approved a proposal by the Aliyah and Integration Ministry, in conjunction with the Finance Ministry, for a new emergency plan for the absorption of Russian olim. The plan is headed by Finance Minister Avigdor Liberman and Aliyah and Integration Minister Pnina Tamano-Shata. Due to recent developments in Russia, tens of thousands of aliyah candidates are expected to arrive in Israel in the upcoming months.

According to the decision, until an individual’s eligibility to the Law of Return is clarified, they will receive the rights that all immigrants are given, including an absorption package and subsistence allowance.

The Post has learned that Aliyah and Integration Minister Pnina Tamano-Shata has written a program and budgeted it for NIS 1 billion for immediate aliyah and absorption from Russia. Yet on Sunday, the government decided to only budget NIS 90 million - for immediate booking of hotel rooms and small funds for each family. This is 9% of the requested funds, needed according to the ministry for proper absorption of olim in Israel.

Government sources familiar with the Aliyah and Integration Ministry and the Jewish Agency said that "this budget isn't enough for anything substantial, again, we will fail in bringing these future Israeli citizens to Israel." He said that at the moment, there are only two hotels available for Russian olim - 100 rooms altogether.