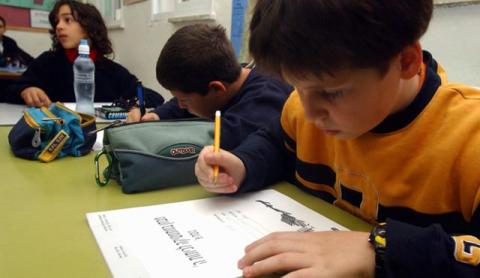 Unprecedented number of test results thrown out due to suspicions of cheating.

Eighth-graders scored significantly worse this year on the math section of the most recent Meitzav exam, a national achievement test, than they did the year before. The Education Ministry is now trying to determine whether the decline stems from a new math curriculum instituted in middle schools.

According to data released by the ministry on Monday, the average eighth-grade math score for the 2011-12 academic year was only 501 points on a scale ranging from 200 to 800, down from 522 points the previous year. The decline affected both Jewish and Arab students, though it was slightly greater among the latter.

Eighth-grade scores also fell in three other subjects tested on the exam - English, Hebrew and science (though the drop in the latter was smaller ). The only subject where eighth-graders showed an improvement was Arabic, which Arab students are tested on instead of Hebrew.

In contrast to the eighth graders, fifth graders improved their Meitzav scores in both English and Hebrew, while their math and science scores stayed roughly constant. The fifth-grade exam in Arabic was invalidated, for the first time since the tests were instituted, because the National Authority for Measurement and Evaluation, which administers the exams, suspected widespread cheating.

Overall, fifth-grade scores have improved steadily over the last four years in all four Meitzav subjects - math, science, English and mother tongue (Hebrew or Arabic ). That had been true of eighth graders as well until the latest test.

Some 113,150 fifth-grade and eighth-grade students took the Meitzav last year. But the authority disqualified the results from 213 classes in Arab schools - about 10 percent of all participating Arab classes - and five classes from Jewish schools, so these students were not included in the final results.

At a press conference in Jerusalem on Monday, Education Minister Gideon Sa'ar voiced concern over the widespread cheating. "The number of classes that were disqualified is unprecedented," he said. "Our assumption is that in the past, too, there have been cases of [grade] inflation that weren't discovered. This is self-deception, and we won't accept it. Every incident of cheating will be handled with the utmost severity."

Ministry officials noted that disciplinary action has been instituted against two principals whose schools were the scene of a significant amount of cheating.

Overall, average scores not only continued to be higher in Jewish schools than Arab ones, but the gap actually widened for both fifth and eighth graders in all three subjects where comparison is possible (English, math and science ). For instance, the gap rose to 46 points in eighth-grade math, up from 36 in the 2010-2011 school year; to 63 points in eighth-grade English, up from 46; and to 43 points in fifth-grade science, up from only 18.

Large gaps also persisted between students from different socioeconomic backgrounds, though in this case they were slightly narrower than in 2010-2011. Among fifth graders, the gap between well-off and needy students stood at 46 points in English, 49 in science, 51 in Hebrew and 57 in math. And the gaps were much higher among eighth graders: 73 points in Hebrew, 80 in English, 84 in math and 87 in science.

The Meitzav also includes a questionnaire relating to the school environment, which is filled out by all students in grades five through 11. The results show that 77 percent of elementary school students, 70 percent of middle school students and 68 percent of high school students said they were happy at school and had no desire to transfer to a different institution.

However, only 41 percent of high school students described teacher-student relations as being close and caring. As for violence, about 10 percent of students overall reported having been involved in a violent incident in the month before the survey. Over the last four years, the percentage has declined slightly at elementary schools, but there has been no clear movement in either direction at middle schools and high schools.

Contrary to popular opinion, however, the highest rate of violence is still reported at elementary schools, whereas high school students report the lowest rate.