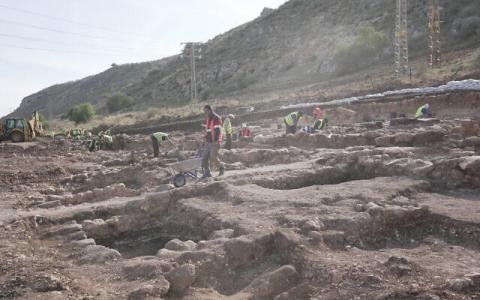 A 2,000-year-old synagogue from the Second Temple Period was recently uncovered at Migdal, on the northwestern edge of the Sea of Galilee, making it the second such synagogue found in the ancient community, the University of Haifa said on Sunday.

It is the first time that two synagogues have been found within the same settlement from the period when the Jewish Temple was still functioning in Jerusalem, a discovery that researchers said is changing their understanding of religious life at the time. Archaeologists had assumed that as long as the temple was still standing there was not such a great need for synagogues, Prof. Adi Erlich of the University of Haifa said in a statement.

Dina Avshalom-Gorni of the University of Haifa, who assisted in the administration of the dig, said the discovery of a second synagogue gives insight into the daily religious life of Jews in the Galilee at the time and testifies to “the need for a dedicated building for study, reading the Torah and social gatherings.”

The location of the two synagogues, less than 200 meters apart, with the first in an industrial area and the second on a residential street, shows they were built “within the social fabric of the settlement,” Avshalom-Gorni said.

The recently discovered synagogue is of basalt and chalk, and comprises a main hall and two side rooms. A stone bench was also found. Six pillars held up the roof and the bases of two of those were also found. The walls were covered in plaster and colorfully decorated. A small room at the south end of the main hall had a shelf that may have been used to store scrolls, the statement said.

The site also yielded a range of artifacts from the period, including pottery candle holders, glass bowls made from molds, rings, and stone utensils used for purification rituals. It was a dig by Avshalom-Gorni in 2009 that discovered the first ancient synagogue in Migdal. That building included a stone with a seven-branched menorah embossed on it, reminiscent of the menorah being used at the time in the Temple.

Migdal, or by its ancient name Magdala, was an important center of Jewish life at the time. It is mentioned in the writings of Flavius Josephus, who was a Jewish military leader in the revolt against the Romans in the 1st century CE, but then eventually switched sides to become a Roman citizen and historian. Magdala is also mentioned in the New Testament as the birthplace of Mary Magdalene.

Current excavations are being carried out by private archaeologist Yehuda Govrin with scientific oversight by the Zinman Institute of Archaeology at the University of Haifa. Work was carried out due to the expansion of Route 90 in the area. Part of the synagogue was found during preliminary excavations at the beginning of the year, although at the time the purpose of the ruin was not yet known.

The Israel Antiques Authority intends to hold meetings in the coming weeks to discuss opening the site to the public.