Israeli Arabs are citizens, not enemies of the state 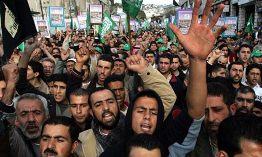 The sense of Arab citizens' alienation from the state stems from their lack of integration, employment and, most of all, criminality, which the state is not investing sufficient resources to contain.

"As a community," Shin Bet security service chief Yoram Cohen said this week, "Arab Israelis are not a target of Shin Bet. They are not a fifth column and we do not view them as such." He also presented data which showed that Israeli Arabs were involved in three attacks during the past year, adding that "the number of those involved in terrorism is not large. We arrested 20-30 Israeli Arabs during the past year, compared to 2,000 Palestinians in Judea and Samaria." The most significant comparison from Cohen's lecture Thursday in Tel Aviv was between Israeli Arabs and right-wing extremists in the settlements, whom the Shin Bet chief plainly said had "decided to horrify and scare the governments of Israel ... we consider this to be terrorism."

Undoubtedly, the sharp wording of Cohen's speech surprised many on the right, mainly among those who tried to influence Prime Minister Benjamin Netanyahu during the appointment process for a new Shin Bet head. They considered Cohen to be a more "friendly" appointment than the other candidate. Perhaps now the right-wing extremists will mark Cohen as a "leftist." However, his conclusions have substantive, nonpolitical significance. It is very important for the public, and even more so for the government, to view the remarks as clear, professional intelligence analysis.

In many ways, Cohen has continued along a consistent line. Shin Bet was always keen to analyze the difficulties experienced by Israel's Arab citizens and warn against their increasing exclusion and the potentially destructive consequences. The sense of Arab citizens' alienation from the state doesn't just stem from their identification with their "brethren in Judea and Samaria," in Cohen's definition (a lesser official would perhaps identify the root of this solidarity with the continued occupation). Mostly it is due to other elements that Cohen also flagged: integration, employment and, most of all, criminality, which the state is not investing sufficient resources to contain.

There is a great gap between this analysis and the claims that the right repeatedly make against some 20 percent of the citizens of Israel, who want to live here as normal citizens. It is clearly possible to conclude from Cohen's statement that the position of the right is no more than a false manipulation.