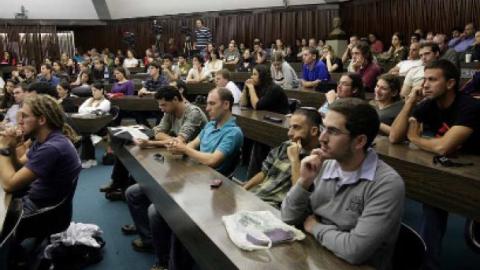 As part of new ethical code promoted by Education Minister Bennett, lecturers would not be allowed to discuss political issues in class or publicly support academic boycotts; many lecturers come out against move.

Lecturers at academic institutions in Israel will be barred from expressing political opinions during class as part of a new ethical code. The ethical code on political activity in academia was written by Prof. Asa Kasher—who also wrote the ethical code for the IDF—at the request of Education Minister Naftali Bennett.

Bennett, who also chairs the Council for Higher Education, plans on bringing the new ethical code for approval at the council so it could be implemented in all universities and colleges in Israel. "Complete academic freedom—yes. Promoting political agendas of lecturers in academia—no," Bennett explained. "Academia is not a political party, and students should not be afraid to express their opinions in class, fearing it would affect their grades. In addition, lecturers should not be allowed to call for a boycott against the institution in which they teacher." "This is not against any political side—it is sweeping across the political spectrum," he clarified. "No side has a reason to oppose this move regardless."

Despite Bennett's assertion, many lecturers have already declared they would not adhere to the new ethical code. In December, after Bennett asked Prof. Kasher to write an ethical code, senior officials in academia called on Kasher to turn Bennett down. At the time, hundreds of lecturers signed a petition saying, "We, lecturers in higher education, declare we intend to completely ignore the conclusions of the Kasher committee... the government has no authority to determine what expressions are appropriate in academia."

According to the new ethical code, lecturers would only be allowed to discuss political issues in class when it is relevant to the course, such as in political sciences. In addition, the code forbids faculty members from participating in an academic boycott or calling on others to support such boycotts. Academic departments are also barred from working with groups and organizations that have a political affiliation. Each academic institute would be required to establish a unit to enforce the ethical code and supervise lecturers' political activity. Students would be able to file complaints with the unit as well.

The new ethical code also determines sanctions for those who break it. A lecturer who promotes his political views in class will be summoned to appear in front of the enforcement unit. If the unit determines the lecturer violated the ethical code, he will be reprimanded in his personal file. If the lecturer ignores this reprimand and continues breaking the ethical code, he could face disciplinary actions. Bennett sought to introduce the new ethical code after receiving complaints over the past two years from right-wing NGOs who asked him to stop left-wing academics from promoting their political agendas during lectures. The Knesset's Committee on Education, Culture and Sport also held several discussions on the issue.

In Prof. Kasher's letter of appointment, Bennett wrote: "A situation must be prevented in which students or lecturers suffer rejection, silencing, exclusion or discrimination because of their identities or personal views, including their political positions. Academic freedom obligates any institution to strive to present to students a comprehensive a look as possible of data, theories, views and relevant arguments. We're all also obligated to protect the student's right to attend a higher education institution without having to listen to political preaching that has nothing to do with their particular field of studies."