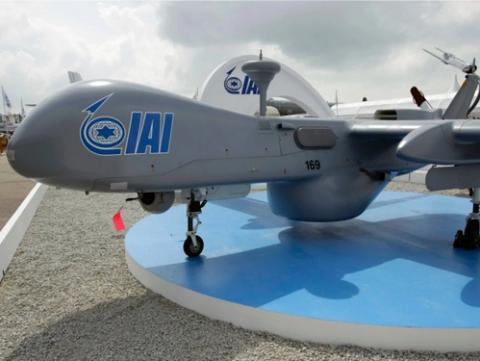 The report released last month said Israel accounted for 2.4% of international arms exports in the years 2017 to 2021, with the main recipients being India, Azerbaijan and Vietnam. Israel’s volume of exports dropped by 5.6% during the time frame, compared to the previous five years.

The only other Middle East countries in the top 25 weapons exporters were Turkey, at 12th, the United Arab Emirates, ranked 18th, and Jordan, 25th.

The five leading countries dominated the global trade, accounting for 77% of all exports. Those countries were the US, with 39%, followed by Russia, 19%, then France, China and Germany. The other countries in the top 10 exporters were Italy, the UK, South Korea and Spain.

Europe and North America accounted for 87% of all arms exports, according to the research institute, which identified 60 countries that exported weapons during the time period. The study said that during that period global trade fell 4.6%. But there was a 19% increase in weapons transfers to Europe, driven by tensions with Russia, even before its invasion of Ukraine. Europe’s largest importers were the UK, Norway and the Netherlands.

There was a slight increase to the Middle East, and large drops in trade to the Americas and Africa. The pandemic had very little impact on the arms trade, the report said. The US grew its market share by 7% and pulled far ahead of Russia, the second-largest exporter. The US delivered arms to 103 nations between 2017 and 2021, with aircraft making up the majority of those shipments, followed by missiles and armored vehicles. The largest share went to the Middle East.

Russia mostly sent weapons to India, China, Egypt and Algeria, and its exports dropped by 26%. The US and France increased their exporters, while trade from China, Russia and Germany fell.

Israel was the 14th largest importer of weapons, accounting for 1.9% of the global share. Ninety-two percent of Israel’s imports came from the US, mostly F-35 jets and guided bombs, followed by shipments from Germany and Italy. Germany supplies Israel’s submarines. Israel’s overall imports jumped 19% over the previous five years.

India and Saudi Arabia were the world’s leading importers, accounting for 11% of global imports each. Four of the top ten importers were in the Middle East — Saudi Arabia, Egypt in third place, Qatar, in sixth, and the UAE, in ninth. Egypt’s imports surged by 73%.

Saudi Arabia stepped up its imports by 27% as it waged war in Yemen and eyed its foe Iran, with most of its shipments coming from the US. The US was the 13th largest importer, with the leading suppliers being the UK, Netherlands and France. Russia was not among the top 25 importers.

During the time period studied, Ukraine was fighting pro-Russia separatists in its east, but not directly combating Russia, and imported very few weapons — only 0.1% of global imports. The study said that, although the UN lifted an arms embargo on Iran in 2020, there is “no public evidence that Iran has since received or ordered notable volumes of major arms from abroad.”

The think tank’s data is partly based on estimates and includes transfers including gifts, sales and production under license.