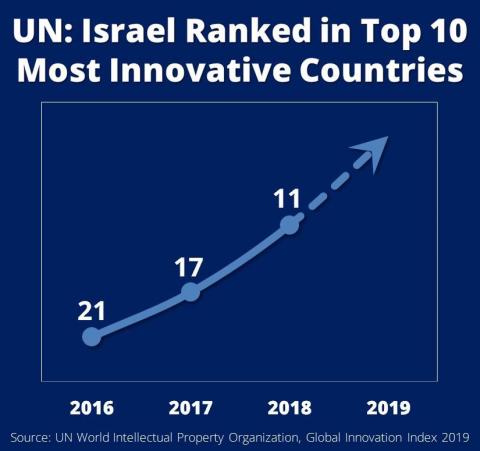 Israel was ranked among the top 10 countries in the Global Innovation Index (GII) of the World Intellectual Property Organization (WIPO).  The GII is an annual ranking of countries by their capacity for innovation and their success. Israel has been climbing the ladder of the index since ranking 21st worldwide in 2016. Since then, Israel ranked 17th in 2017 and 11th in 2018 and, for the first time this year, reached the top 10.

The placement within the top 10 will only be divulged after the exposure event on July 24 in which Israeli Ambassador to India Dr. Ron Malka will represent Israel, along with Israeli Director of Digital Health Esti Shelly. The GII chooses and ranks the most innovative countries in the world out of 129 countries using a complex algorithm and measuring 80 indicators, which examine the overall creative environment within the country. Some key categories include levels of education, investment in infrastructure, investment in research, business sophistication and political environment.

This year's focal topic for the GII is the future of health innovation. The index analyzed the environment that supported global healthcare innovation throughout the world over the last decade. It also examined the role of medical innovation in shaping the future of health services and the potential impact on economic development of the competing countries.

The honor of receiving such recognition on a platform such as the UN comes after the Israeli government announced a national program called, "Digital Health as a Growth Engine" in 2018. The program was aimed at maximizing the economic and social benefits of innovative digital health solutions, as well as leveraging Israel's comparative advantages in technological innovation, medicine and research.

Israel has additionally been trying to implement the UN Sustainable Development Goals (SDG), a collection of 17 global goals set by the United Nations General Assembly (UNGA) in 2015 for the year 2030. The index was developed by the WIPO, Cornell University and INSEAD, one of the leading schools for business in the world.

WIPO CEO Francis Gurry visited in Israel on Tuesday as the guest of honor at an international conference about advanced intellectual and technological property.