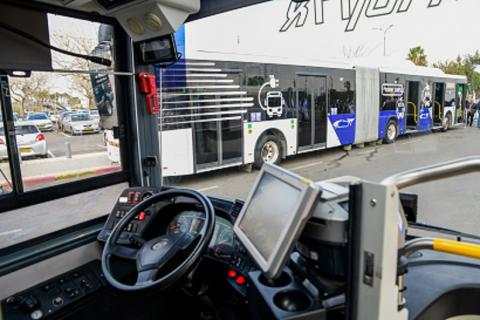 Innovation Authority taps four consortiums made up of Israeli bus companies as well as local and global tech startups for trial of autonomous public transport. Israel is set to pilot self-driving public buses for the next two years in a bid to ease the country’s notorious traffic congestion and improve services to encourage use of public transportation.

The Israel Innovation Authority (IIA) said Sunday that four consortiums were selected to carry out the trial across the country, starting with the first phase of operating and testing in secured, closed sites and then progressing to autonomous bus lines on public roads, at an increasing range over the two-year period.

Earlier this year, the Knesset passed legislation that will allow companies to pilot autonomous shared transportation, like taxis and buses, with passengers in the vehicle but without a safety driver on Israeli roads.

The law clears the way for the national plan for autonomous public transportation, as well as for Jerusalem-based Mobileye, Intel’s autonomous driving subsidiary, which was expected to launch a pilot for autonomous taxis (“robotaxis”) and ride-hailing services in Tel Aviv (and Munich) this summer. The initiative has yet to start.

The four groups in the public transportation pilots are the two major Israeli bus operators, Egged (with the largest intercity routes) and Dan (only in the Gush Dan area); and a pair of smaller operators, Metropoline (which provides bus routes in southern Israel, to and from Tel Aviv and Beersheba, and in and between cities in the Sharon region) and the Nazareth-based Nateev Express, which operates routes across the Upper Galilee in the north.

These four transport companies will partner with their respective groups of startups and organizations based in Israel, France, Turkey, Norway, and the US.

Egged is teaming up with a French developer (name undisclosed) of an autonomous vehicle that is already in use in various testing environments in about 20 countries, according to the announcement. The Dan company will join up with its long-time partner, mobility and ride-sharing firm Via Transportation (with which it operates the Bubble shuttle system in and around Tel Aviv), as well as EasyMile, the French developer of a battery-powered autonomous electric bus, and Israeli companies Enigmatos, an autonomotive security startup, and Ottopia, the maker of assistive tech for autonomous vehicles. EasyMile already has autonomous bus fleets in France and Germany.

Meanwhile, Nateev Express will link up with Israeli company Imagry, the developer of a camera-based, Level 4/5 self-driving platform to operate autonomous shuttles in and around Israel’s largest hospital, the Chaim Sheba Medical Center (also Tel Hashomer Hospital) in Ramat Gan. (Level 4 provides high automation without the need for human intervention in limited areas — also known as geofencing — but humans can still manually override if necessary. Level 5 autonomous driving does not require human attention.)

The groups will receive half the funding for their pilots from the IIA, and will operate within a special, advanced regulatory framework built by the Transportation Ministry’s National Public Transport Authority, from which they will also get licensing and supervision.

The project will allow authorities to map the infrastructure required to operate an autonomous public transport system and test the business aspects of such an undertaking, the IIA said. Groups that successfully implement and complete the two-year pilot will be offered contracts to expand their services in Israel.

The plan may also help alleviate a national shortage of bus drivers, who have been striking intermittently since the summer.

“Moving to fleets of autonomous, driverless buses will help streamline the public transportation system, improve the level of safety, and deal with the shortage of drivers – all within a few years,” IIA CEO Dror Bin said in April.

IIA chairman Ami Appelbaum said Sunday that by creating an advanced regulatory infrastructure for testing driverless autonomous vehicles, the government was “harnessing the autonomous vehicle to improve Israeli public transportation,” and positioning Israel and Israeli companies as a “global leaders” in this sector.

Applebaum noted that the number of Israeli startups in the smart transportation field has “increased from 400 in 2016 to more than 600 in 2020,” with the establishment of autonomous vehicle startups seeing an average annual increase of 26% in the same period.

Since 2008, he said, “more than 20 of the biggest car manufacturers in the world and their suppliers have opened development centers in Israel,” including General Motors, Honda, Volkswagen, Ford and the Renault–Nissan–Mitsubishi alliance.

“Along with advancing regulation that will enable more advanced experiments, we strive to encourage and promote further experiments, in combination with the existing technologies in the municipal public transportation system in Israel,” Bin had said.

Generally, Israel’s transportation infrastructure has lagged “significantly behind most other OECD countries,” and “coordination between central government and local authorities in infrastructure projects is one of the least effective” in the organization, according to OECD findings.

Progress on passing the so-called Metro Law to finance Israel’s most ambitious infrastructure project, a public subway network to connect Tel Aviv to key commuter zones, was frozen amid political wrangling this summer just before the call for elections.