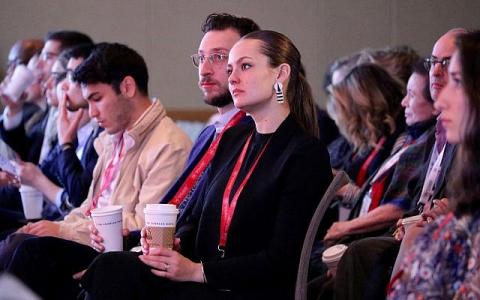 The Jewish state’s contributions to the world were lauded on Sunday during the first-ever “Israel Summit at Harvard,” a conference organized by Harvard University students from several academic departments.

Featuring 15 high-profile Israel advocates, the gathering was geared toward helping students “gain a broader understanding of Israel,” according to Harvard sophomore Max August, the summit’s director. August, who raised $200,000 to stage the event, addressed some 400 attendees about his goal of breaking through the “endless cycles of negativity” surrounding Israel on campus, in part by focusing more on “uplifting narratives.”

In the past week, August told the audience gathered at Cambridge’s Charles Hotel, anti-Israel protesters have convened on Harvard’s campus and in downtown Boston. On Tuesday, eight activists chained themselves to the doors of the Israeli consulate’s office building during a demonstration against the IDF’s response to “March of Return” protests along the Gaza border fence.

Back at Harvard, several Jewish student groups hosted a “Liberation” Passover seder focused on “liberating” additional disputed territories from Israel. Likewise, in recent years, Israel-related forums at Harvard have tended to focus on the Israeli-Palestinian conflict. This weekend’s summit was intended to “inspire the base” and “expand our outreach,” according to August.

In an interview with The Times of Israel, August said he and his team “tried to do it a little bit different” and not only focus on Israel’s “political challenges.” Another change is that although large Israel conferences on campus are typically organized by well-funded national organizations, the Israel Summit at Harvard was created by a group of eight students. “We wanted to celebrate the Israeli spirit and the Israeli culture,” said August. “We didn’t want it to be the classic Israel event.”

Up close and personal

Among the “Personal Stories” told by an array of high-profile Israelis, celebrated fashion designer Elie Tahari spoke about his life and career spanning 40 countries, beginning with a childhood in Iran. An exception to the apolitical tone came when Lawrence H. Summers, former Secretary of the Treasury and Harvard President Emeritus, was interviewed by political analyst David Gergen during a session called, “Israel in the World Economy.”

During the conversation, Summers said the Trump administration’s diplomatic approach is “so strongly tilted toward Israel.” There is “an overly reflexive connection” to the Jewish state, said Summers, and that stance has enabled Israelis to “avoid asking questions” about the future, he said.

Attempting to strike a balance between poles in the American pro-Israel camp, Summers said he is “not comfortable with the direction” of either AIPAC or J-Street. According to the former Harvard University president, Israel benefits from “a culture that privileges argument and the search for truth,” in addition to “Jewish culture” and “a reverence for learning.”

Most of the day’s speakers steered clear of US politics and Israeli-Palestinian relations. Chloe Valdary, a former campus activist who works for the advocacy-focused Jerusalem U, spoke about a framework for Israel engagement she formulated during a stint at The Wall Street Journal. “We as a community have been asking the wrong question,” said the 24-year-old Valdary. Instead of responding to every anti-Israel attack, she said, “we should have been asking ourselves, how do you get people to fall in love with Israelis?”

Referencing her “Theory of Enchantment” for Israel outreach, Valdary urged activists to “help people see their own potential” through the lens of Israel. As an example, Valdary spoke about her love for the singer Beyonce, and how “that love can be applied to falling in love with Israel.” Within the coming weeks, Jerusalem U will release a video based on the summit, including content developed by Valdary.

The conference closed with retired NBA All-Star Amar’e Stoudemire explaining his love for Israel, which he considers “an adopted homeland.” The accomplished basketball player ended his career last year by helping Hapoel Jerusalem win the Israeli League Championship. Stoudemire continues to have many personal connections to the Jewish state.

Making the world a little safer

While some speakers highlighted Israel’s success in tackling global challenges, one Israeli CEO spoke about his company’s role during a hometown crisis. Following the Boston Marathon bombing in 2013, the company BriefCam deployed its facial recognition software to capture images of the bombers. According to BriefCam CEO Trevor Matz, the company was recognized by former Massachusetts Governor Deval Patrick for helping to identify the terrorists.

Based in Newton, outside Boston, BriefCam is one of 200 Massachusetts companies with ties to Israel. In total, these companies generated $9.3 billion in revenue for the state during 2015. A dozen Israeli companies were part of the summit’s Career Fair, including several biotech outfits and the nonprofit accelerator MassChallenge.

Other prominent speakers who lauded Israel were New York Senator Charles E. Schumer, who appeared via a video interview, and Israel’s former representative to the United Nations, Ron Prosor. During his remarks, Prosor spoke about the UN’s fixation on condemning Israel at the expense of addressing — for instance — the Syrian regime’s use of chemical weapons against civilians.

Tapping into a common theme of the day, Gidi Grinstein of the policy-based Reut Institute spoke about the Jewish people’s 3,800-year-old mandate to be “a light unto the nations.” According to Grinstein, the combination of “technological innovation and societal innovation” has propelled Israel for decades. For instance, said Grinstein, the country’s relatively new ability to desalinize water was developed in tandem with citizens’ efforts on the ground.

According to the organizers, summit attendees expressed a high degree of satisfaction with the “inspirational” content. “As students at Harvard we have a power and a privilege to constantly shape our world for the better,” said Ilan Goldberg, the summit’s director of content. “Today, I feel proud and extremely lucky to have had the opportunity to bring Israel, a land with which I feel an ancient connection, to my life and to our university,” Goldberg told The Times of Israel.