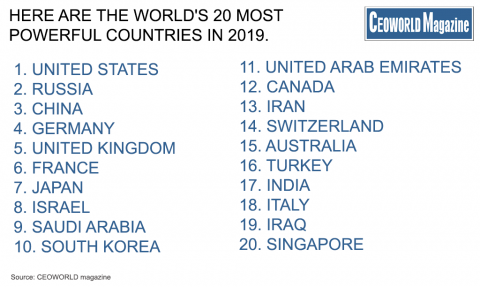 Israel was ranked the eighth most powerful country in the world, according to the US News and World Report's power ranking in 2019. The power ranking was based on leader, economic influence, political influence, international alliance and a strong military. This ranking was part of a subcategory ranking for the US News's annual Best Country ranking. Israel received a high ranking because of its strong military, along with its strong political influence and international alliances.

The top nine most powerful countries, according to the report, have not changed since 2018. The United States of America snagged the No. 1 spot because it has the largest economy and biggest military budget in the world, spending more than $610 billion on military hardware and personnel in 2017, according to the report. In 2017, the US also spent slightly more than $35 billion in economic aid and nearly $15 billion in military aid.

Israel was also rated No. 13 in the "Mover" category. These are countries that the World Bank predicts will have the fastest growing economies over the next couple of years. Mostly Middle Eastern and Asian countries dominate this ranking, with the United Arab Emirates in first place, with Singapore following behind in the No. 2 spot.

The country which was ranked best country in the world according to the report was Switzerland, which has held its title since 2017. The ranking was based on the categories of adventure, citizenship, cultural influence, entrepreneurship, heritage, movers, open for business, power and quality of life.

Some 80 countries were ranked in total, while there are 193 United Nations member states.