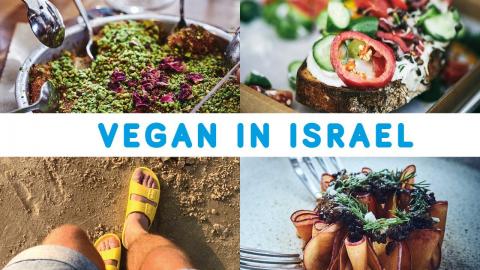 Israel was third on Chef’s Pencil’s top countries for vegans in 2020, ranking behind the UK and Australia. Over 5% of Israelis say they are vegan, and the country’s vegan-friendly culture and its plethora of plant-based cuisine options have brought Israel to the forefront of discussions surrounding its vegan dominance.

However, the Mediterranean diet provides most of the allure of the vegan cuisine offered in Israel, not the disposition of its citizens toward meat products. “Unique to this newly formed country is the mix of the traditional Mediterranean diet of the area and the strict dietary laws of kosher food – the separation of meat, dairy, and parve, which is pretty much vegan apart from the fish gelatin and honey, which means it has been easy to embrace veganism,” Chef’s Pencil said.

Additionally, the constant influx and mix of immigrant cultures adds a different flavor to street vegan food, and adds a distinguishing factor to the surrounding culture while adding to its popularity.“With less than half the population being native to the region, the immigrant mindset of looking for something new has to be a big reason veganism has become so popular,” the website said.

Notably, the IDF is the most vegan army in the world, with 1 out of 18 soldiers declaring themselves vegan, according to a 2018 Army Radio report. Maj.-Gen. Aviv Kochavi is also the IDF’s first vegetarian chief of staff.

According to that report, the number of vegans in the IDF increased 20-fold from 2015-2018, with the majority serving in the Intelligence Corps, the Kirya military headquarters and in support roles. Chef’s Pencil notes that according to Google Trends, while 2020 has been quite a wash, veganism is still on the rise throughout most parts of the world. It said veganism is now twice as popular in 2020 as it was in 2015, similar to the IDF survey.

In regard to widespread popularity, Europe has the most countries at the top of the list, followed closely by Oceanian countries, then by North America and Asia. Israel is the only Asian country in the top 15.The full list is as follows: