Israel is ranked fifth among the world’s most innovative economies 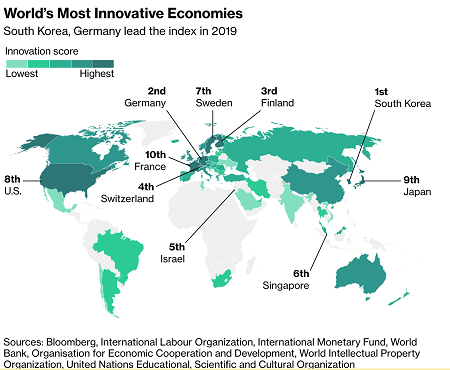 Israel is ranked fifth among the world’s most innovative economies, according to a new Innovation Index published by Bloomberg, bounding five spots up from last year, when it came in 10th. South Korea and Germany led the index, ranking first and second respectively, followed by Finland, Switzerland and Israel. Singapore took sixth place, Sweden seventh, and the US, Japan and France came in at eight, ninth and tenth.

The US rose three spots in the 2019 ranking, after it fell out of the top 10 economies for the first time in 2018, Bloomberg said. South Korea took first place in the 2018 ranking as well. The list published on Tuesday comes as global elites meet at the annual World Economic Forum in Davos, Switzerland, where they will discuss the future of globalization, the role of the state and how innovation can help push economies forward.

This is the seventh year of publication of the annual Bloomberg Innovation Index. The 2019 index is compiled by analyzing seven equally weighted categories, including research and development spending, patent activity, manufacturing capability and concentration of high-tech public companies.

The so-called Startup Nation was ranked second globally for researcher concentration, defined as professionals engaged in R&D per population; fifth for high-tech density, defined as the number of domestically domiciled high-tech public companies; and fourth for patent activity. Israel came in 36th, however, in the category of Tertiary Efficiency, defined as total enrollment in tertiary education, and eighth in productivity. Its total score was 84.78, the ranking showed, compared to 87.38 for South Korea and 87.30 for Germany.