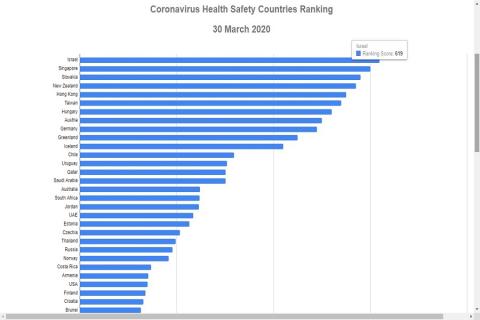 Coming in first place with a ranking of 619, Israel made the first place rank beating out other countries such as Singapore, New Zealand, Hong Kong, Taiwan, Hungary, Austria, Germany, and Greenland who all factored into the top ten. The chart, published by the DKG, did not state how those rankings were given or what qualifications were required to receive the marks that were handed out.

The United States placed 27th on the list with a score of 140. At the bottom of the list was India which was ranked as the least safe country with a score of 39.48. On an additional graph, the DKG also ranked the effectiveness of treatments given to patients of Covid-19 based on the country and this time Singapore took first place, with Israel coming in 9th. The United States did not place on this graph, most likely due to insufficient data.

Israel’s government press office was quick to pick up on the report and published a special press release about it, which was then picked up by mainstream Israeli media sites. According to their website, the Deep Knowledge Group is a consortium of commercial and non-profit organizations active on many fronts in the realm of DeepTech and Frontier Technologies (AI, Longevity, FinTech, GovTech, InvestTech), ranging from scientific research to investment, entrepreneurship, analytics, media, philanthropy and more.