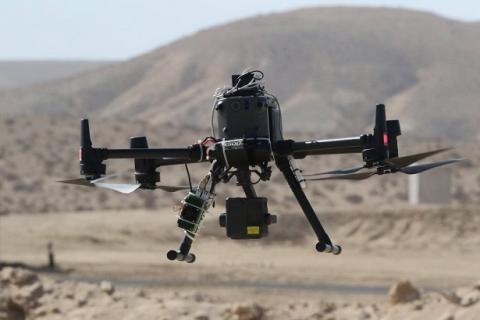 The first worldwide test of drone flights in GPS-denied environments was successfully carried out in Israel last week. The delivery was part of the Israeli drone delivery pilot program, NAAMA, which is operated by the Transportation Ministry, Civil Aviation Authority, Israel Innovation Authority, and Ayalon Highways, and was carried out in a special test zone in Yeruham.

The current test sought to examine the usability of Beyond Visual Line of Sight (BVLOS) navigation solutions, due to the increasing possible threat of GPS signal disruption. Multiple factors can disrupt GPS signals, ranging from malfunctions, solar flares or malicious intent by individuals.

As drones rely heavily on GPS for navigation, finding a BVLOS navigation solution is critical. The solution that was tested was made by Sightec, in collaboration with Simplex Interactive. Called NavSight, the system is camera-based and allows for artificial intelligence to assess the visual situation for autonomous day and night missions. Essentially, it lets the drone understand the surrounding environment like a human pilot.

The successful test is a major step on the road to establishing commercial drone delivery operations in Israel. Another drone test program was announced last week, with Pizza Hut Israel planning to launch a pilot program in the summer in Kfar Yona to test autonomous drone pizza deliveries.

Leading American retailers like Amazon and Walmart have also been developing drone delivery capabilities, as well.