Israel Can Compete With America’s Quality of Life 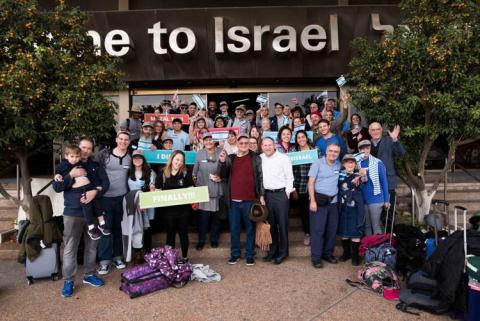 Between the protests in U.S. cities that have spilled into violence and the Trump administration’s disastrous handling of the coronavirus pandemic, it's no surprise that more American Jews are wondering if Israel could offer a better life than what they have at home.

We won’t know for another year or so. But even before the protests erupted, there were some faint signals of immigration getting onto the agenda. According to the immigration organization Nefesh B’Nefesh, the number of North American Jews applying to make aliyah was up 50% in April compared with the same time last year, and the number of application form downloads was up 54%.

True, the numbers involved are still tiny (455 and 654 people, respectively), but the coronavirus pandemic could be providing fresh food for aliyah thought.

Israel has suffered its fair share of pandemic policy bungling, but the fact is that no one in the world has contained the pandemic without major glitches. But if the outcomes to date are any indication, being Israeli was the healthier choice over being American. The U.S. has suffered more than double the COVID-19 cases per million compared with Israel: 5,749 people versus Israel’s 1,895. The mortality rate in Israel is 32 per million, less than a 10th of the U.S. rate.

But the coronavirus aside, or for that matter Zionism, is it really a better deal to be living in Israel these days? It wasn’t long ago that a question like that didn’t deserve serious consideration. But maybe the balance has shifted? Here’s a checklist you should consider before you submit that Nefesh B’Nefesh form and find yourself posing on the tarmac of Ben-Gurion Airport with a blue-and-white banner.

Health care: If you live in Israel, you may well live longer (82.8 years on average, compared with 78.5 in the U.S.) and pay a lot less for the privilege: Israel spends 7.4% of GDP on universal health care, compared with 17.1% in the U.S., where it's far from universal.

That really makes a difference in terms of disposable income, but it goes beyond that. Even if Americans have good private health insurance, what the coronavirus has exposed is that vulnerability to disease is also a function of the public health care system – and on that account, the U.S. looks bad next to Israel. If we’re entering an age of pandemics, staying healthy in America will remain a serious risk even for those with adequate insurance.

Cost of living: America delivers products and services to consumers at prices almost no other country can match. Compared to the average of other countries in the Organization for Economic Cooperation and Development, prices for daily household expenses in Israel are tens of percent higher.

But as health care costs show, not all the cost-of-living issues work in America’s favor. Education is another big expense that in Israel is a fraction of what it is in the U.S. A year’s tuition at Jerusalem's Hebrew University is just 15,000 shekels ($4,300), and you get your bachelor’s degree in three years instead of four. A year at Emory and Case Western universities (both ranked close to Hebrew University’s 162nd place in QS world rankings) costs $52,000 to $55,000. That difference will buy you many years of exorbitantly priced Israeli cottage cheese.

Housing: If you had been a true Zionist and made aliyah 20 years ago, you would have seen your home equity grow enormously, certainly compared to America. If you come now, unfortunately, you’ll be facing a high cost of housing. You’re also going to have a lot less space: The average Israeli home has just 1.2 rooms per person, much less than the 2.4 rooms in an average American home. The plus side is it could aid family togetherness. On the other hand, it could lead to fratricide.

Violence: Not to worry about that. Not counting soldiers, Israelis have far fewer guns in their possession than Americans (6.7 per 100 people, versus 120.5). The homicide rate in Israel is just 1.4 per 100,000 people, far below the U.S. rate of 5, even taking into account terror attacks.

Road safety: Although Israeli drivers are not renowned for their safety skills, they still manage to kill far fewer people than their American peers: Israel has 4.2 road accident fatalities per 100,000 people, about a third of the U.S. rate.

Income and taxes: This is where America wins hands down. Despite nearly 20 years of economic growth and tax cuts (that is, until the coronavirus), Israel is still far behind the U.S. Israelis pay higher taxes. The top marginal rate in Israel, including social contributions and consumption taxes, is 58%, compared with 47% in the U.S. Average net disposable income per capita is just $24,863, a little over half America’s $45,284.

For lower pay, Israelis are more likely to put in long work-weeks of 50 hours plus and spend less time on "personal care" (which includes almost everything that isn't work, including sleeping), than Americans: 13.7 hours a day versus 14.4.

The bottom line? If you’re still intent on acquiring the most things before you die, America is still the place to do it, even taking into account that the lower life expectancy will give you less time to do it. But what if we're embarking on a new era where health is something you can’t take for granted, a more modest paycheck and a smaller apartment may not look so bad.