Israel can be excluded from the Horizon program 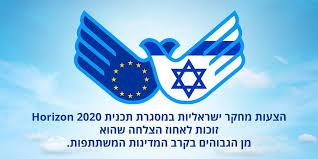 Economic sanctions on Israel will be a tough sell for the group of countries that has been weighing it, because it requires unanimity and several have already said they oppose the measure. In the continuing discussions of how the European Union should respond to the possibility that Israel will apply sovereignty to parts of the West Bank, the Horizon scientific funding program is often mentioned as something that is at risk.

Economic sanctions on Israel will be a tough sell for the group of countries that has been weighing it, because it requires unanimity between all EU member states and several have already said they oppose the measure.

The Horizon program is set to be renewed next year, and leaving Israel out of the program would not require a consensus in the EU. Therefore, some member states and the European Commission are thought to be considering changes to how much Israel will be able to benefit from it, if at all, in response to sovereignty moves. A Mitvim Institute for Regional Foreign Policies paper on the risks Israel faces in such a scenario states that “Horizon has been defined by government officials and professionals over the years as having strategic importance to the state.

”Horizon is the largest program of its kind, in terms of funding and the number of countries taking part, which is 43. The last program granted almost €80 million to scientific research and the next one is expected to reach €100m. The programs, which began in 1984, are renewed every seven years. Israel was the first non-European country to take part, beginning in 1996. The cycle beginning in 2021 will be called “Horizon Europe.”Funding is given to “consortiums” of research and development institutes from a number of countries that submit research proposals, which are then judged by experts.

This allows for cooperation between Israeli research institutions, hi-tech companies, industry and academia to cooperate with top researchers from other countries on applied research, and development to improve products. Israeli proposals have a higher acceptance rate than the European average of 11%, with 13.5% of proposals getting funding.In the 2007-2013 Horizon program, Israel invested €535m. and Israelis won grants totaling €875m. Israel invested €1 billion in Horizon 2020 and Israelis won €1.2b. as of June, but could get more by the end of the program.

The Mitvim report said the program is worthwhile for Israel in ways that are not quantifiable, as well, such as making Israel more economically competitive, developing international ties for Israeli researchers, building knowledge of advance technologies, creating a better business presence for Israel in Europe, increasing investment from foreign factors that will see the EU grant as a reason to trust a project, job creation, economic growth and more.

“Horizon 2020,” launched in 2014, was also a political issue in Israel, because the EU refuses to work with research institutions in the West Bank, such as Ariel University. At the time, following political controversy and fierce protests from academic and research institutions, the government deemed the program to be too important to give up and negotiated so that the agreement was worded in a way that was acceptable for Israel.If Israel is left out of Horizon Europe or its funding is reduced, Mitvim estimated that there will be “serious harm to research, industry and academia.”

“This will harm international cooperation, access to research infrastructure [laboratories and facilities], and the ability to use research databases,” the Mitvim paper reads. “Beyond that, there will be a significant retreat in the scope of relations between Israel and the EU.”