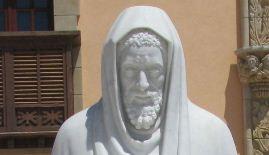 Customs authorities are holding up a new version of a seminal work in Jewish thought because importing this Arabic-language edition "violates laws regarding trade with the enemy." The book was printed in Beirut. The work is the Kuzari by Yehuda Halevi, a Spanish Jewish poet and philosopher who died in 1141. Dozens of copies are being held in storage at customs at the Allenby Bridge, which crosses into Jordan.

Halevi wrote the Kuzari in Arabic in Hebrew letters; this fusion was typical of Jews who lived in Islamic lands in the Middle Ages. The publisher of the current version is an Iraqi refugee who lived for many years in Germany. The publishing house's official address is in Germany, but the current edition was printed in Lebanon. The Kuzari was translated into Hebrew in the 12th century, providing a version for Jews around the world who did not speak Arabic. In modern times, the text has been translated into many languages.

Nabih Bashir, a Jerusalemite pursuing a doctorate at Ben-Gurion University of the Negev's Jewish Thought Department, is the translator of the current edition. Receiving no economic assistance, he took seven years. Bashir translated into Arabic various Hebrew annotations that accompany the text, and added explanations, introductory comments, appendixes and an index. He was helped by Israeli experts on Halevi's work, including Dr. Ehud Krinis, who contributed an introduction.

Krinis says the Arabic translation was printed in Beirut, a key publishing center in the Arab world. He notes that the Kuzari is not well known among Arabic readers. Though Bashir did not receive wages for his translation - he even spent NIS 12,000 of his own money for editing - he couldn't find a publisher in either Israel or a country not considered an enemy state. Last month the book was supposed to be launched at an international book fair in Ramallah, but Israel prevented a number of publishing houses in the Arab world, including the one responsible for the new version, from taking part.

Bashir told Haaretz that most of the Arab-language books sold in Israel are imported from Lebanon, and that the authorities frequently overlook the law banning book trade with enemy states. He said the customs authorities often slap expensive duties on imported Arabic books, so Arab-language volumes are usually more expensive in Israel than elsewhere in the Middle East.