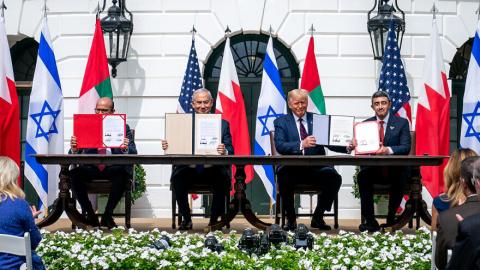 After the UAE-Israel deal was announced in August the Russian perspective was largely ignored in most western media. However, Russia has expressed differing views on the deal as it matured and came to include Bahrain. Russia appears to both embrace it and have skepticism about it. But the official views on the surface may be only part off the story. The deals are an American affair and could be s setback for Russia’s increasing role in the region.

An article at the Middle East Institute in August basically asserted that Moscow is of two minds on the issue. Now a new report at Tass news provides more insight into Russia’s views.In late August, Russian President Vladimir Putin and Israeli Prime Minister Benjamin Netanyahu spoke by phone and discussed the UAE deal. At the time Bahrain was not yet in the news.Netanyahu and Putin have had warm relations for many years and Israel and Russia frequently have discussed Syria over the years.

This has meant a reduction in tensions. However, Russia has expressed the traditional view in the last week that peace is not possible in the region without an Israeli-Palestinian deal.Russia should know since its Cold War policies helped arm states that were hostile to Israel and Palestinian groups, including terrorists, looked to eastern bloc states for support or at least transit and shelter.

Thus Moscow helped fuel the paradigm that sees the Palestinian conflict as a center of the Middle East. Yet Moscow also plays a limited role in solving this conflict and has been more pragmatic than US policymakers who have sometimes bordered on naivety when looking at chances for peace.Foremost for Moscow is the importance of stability in the region and not having ungoverned spaces that breed extremism.

Moscow is willing to work with authoritarian regimes and doesn’t care about the US former policies of democracy promotion in the Middle east or humanitarian intervention. Given this history and complexity of Russian policy it is important to recall that Lavrov met Hamas leader Ismail Haniyah earlier this year and the leader of Palestinian Islamic Jihad.Israel complained about these March meetings.

Russia has generally said it could play a larger role in hosting Israeli and Palestinian leaders. The new report at Tass news over the weekend, is presented as a press review of Russian media. Tass is an official Russian outlet. The review notes that Palestinian Authority Ambassador to Moscow Abdel Hafiz Nofal told Russia’s Izvestia said that the Palestinians support the 2002 Arab Peace Initiative hat envisions Israel leaving all “territories occupied in 1967.

”Tass then noted that “Oman could be the next one to recognize the Jewish state,” a statement it attributes to Israeli officials. The newspaper indicated Israel had not fully given up annexation plans for the Jordan valley. Tass also notes that the Chairman of the Federation Council Foreign Affairs Committee Konstantin Kosachev “believes that the normalization of ties between the UAE, Bahrain and Israel is unlikely to bolster the peace process in the Middle East, stressing that on the contrary, the escalation is going to mount.

”Furthermore a Senior Fellow of the Center for Arab and Islamic Studies at the Institute of Oriental Studies in the Russian Academy of Sciences named Boris Dolgov, has said that the “Bahraini and Emirati recognition of Israel did not come as a surprise. Both countries are known for their pro-US position: Bahrain hosts the Fifth Fleet of the US Navy and the US air force’s Al Dhafra air base is located in the UAE.

This step won’t drastically change the situation in the Middle East, but it will split the Arab and Muslim world,” Tass news reported that the expert explained.