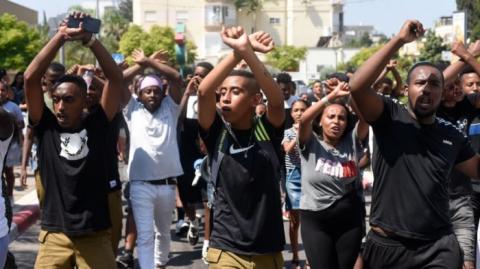 The Council for Higher Education in Israel has set a goal to increase the number of Israelis of Ethiopian origin enrolled in undergraduate and graduate programs. The initial target, which the council hopes to meet by 2020, is to increase the number of students from the community who are pursuing a bachelor’s degree to 1.7 percent of the student body, similar to their percentage in Israel’s overall population. Currently that rate stands at 1.54 percent, or 3,567 students.

Only a tiny number of Ethiopian Israelis who have earned undergraduate degrees continue on to postgraduate degrees. The initiative is a result of the struggle by Ethiopian community activists in recent years to integrate the community in all walks of Israeli life and the fact that responsibility for integration of Ethiopian students has passed from the Immigrant Absorption Ministry to the Council for Higher Education in Israel.

Over the past two years, the council has already begun promoting various programs to encourage more Ethiopian Israelis to continue their studies at the academic level. Now the council will combine separate programs it has already launched into a focused effort to achieve its goal by 2022, at which time progress will be assessed. The budget for the program stands at 36 million shekels ($10.3 million) a year, or about 140 million shekels a year through 2022.

The council said that thanks to the implementation of some components of programs so far, the number of Ethiopian Israelis enrolled in bachelor’s degree studies has risen from 1.35 percent of students in 2016 to 1.54 percent today. Nevertheless, this is still far lower than their percentage in the population.

Most Ethiopian-Israelis pursuing academic studies are enrolled in colleges – there are only 1,072 Ethiopian-Israelis studying in universities – where they constitute only 0.9 percent of the student body. According to figures from the Council for Higher Education in Israel, 47 percent of Ethiopian students are enrolled at public colleges, 11 percent at teachers’ colleges and 15 percent at the Open University of Israel.

In 2016, the council’s subcommittee on planning and funding established a panel to find ways to make higher education more accessible to Ethiopian Israelis, headed by Prof. Yossi Shain of Tel Aviv University. Education Minister Rafi Peretz recently dismissed Shain as chairman, apparently because of the latter’s opposition to the council’s approval to establish a medical school at Ariel University, in the West Bank.

One of the people involved in planning the program is social activist Jajaw Bimro, who was a student at the Hebrew University of Jerusalem at the time and later became a member of the panel. When responsibility for the integration of Ethiopian Israelis in higher education was transferred to the Council for Higher Education, Bimro said: “Higher education has the power to create social mobility and lead the change we seek in many areas. The acquisition of higher education is not just studying in one institution or another, but rather an essential step toward the future, and these changes will benefit and advance the population of Ethiopian origin toward independence and academic success in particular and in Israeli society in general.”

As part of one component of the program, in 2017 steps were taken to find young people with potential after their release from the military or national civilian service, to provide them with individual and group assistance throughout their studies.

The chairwoman of the subcommittee on funding, Prof. Yaffa Zilbershats, said the subcommittee “was committed to promoting real equality that allows all students to fulfill their talents without reference to their origin or place of residence.”