Israel 10th-healthiest country in the world 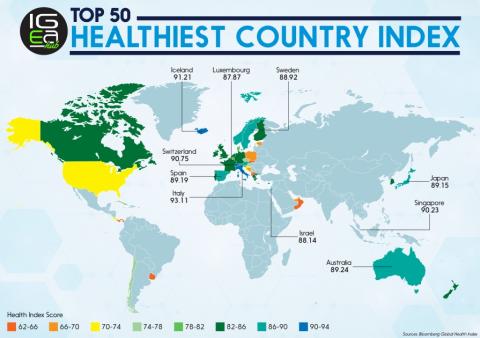 Israel was ranked the tenth-healthiest country in the world, according to an assessment published by Bloomberg on Sunday. The Bloomberg Healthiest Country Index puts the Jewish state one spot lower than its 2017 position. Spain topped the 2019 list, jumping five places from its place in the previous report.

The index ranks 169 countries “according to factors that contribute to overall health,” Bloomberg said. “The index grades nations based on variables including life expectancy, while imposing penalties on risks such as tobacco use and obesity. It also takes into consideration environmental factors including access to clean water and sanitation.”

Following Spain, the next top healthiest countries were Italy, Iceland, Japan, Switzerland, Sweden, Australia, Singapore, Norway, and then Israel. The US ranked 35th on the list, far further down than Canada, which placed 16th. “Life expectancy in the US has been trending lower due to deaths from drug overdoses and suicides,” the report noted.

Citing an October 2018 study from the University of Washington’s Institute for Health Metrics and Evaluation, Bloomberg said Spain is expected to have the highest lifespan in the world by 2040, of 86 years, for those born in that year, followed by Japan, Singapore and Switzerland.

That study predicted Israelis will have a lifespan 84.4 years in 2040.