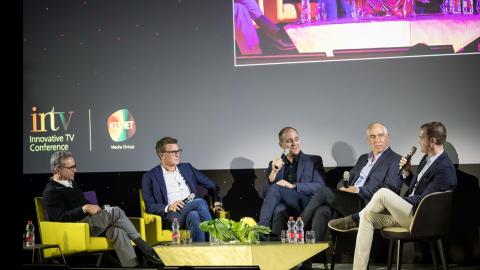 Though Netflix was absent from the two-day INTV Conference in Israel, the streamer — and its recent megabucks overall deals with star showrunners Shonda Rhimes and Ryan Murphy — was the single biggest topic of conversation as executives and producers gathered this week at the YMCA in Jerusalem.

“I’m glad they’re not [here],” Kevin Reilly, Turner Entertainment chief creative officer, told Variety. “Only because I get tired of coming to these, and it’s like, ‘Oh, the big boys have entered the room.’ It’s nice to be a little thoughtful without everyone waiting for the voice of God.”

The television business is going through seismic upheaval, and the aggressive moves by the streamer to launch dozens of new series and lure power players away from traditional platforms is having a ripple effect not just in Hollywood’s creative community — but around the world. “It’s real and it needs to be talked about,” said Reilly.

One of the highlights of the festival was the network chiefs panel: WME TV chief Rick Rosen gathered four titans across broadcast and cable, including HBO’s Casey Bloys, Showtime’s David Nevins, Fox’s Gary Newman and Turner’s Reilly. (Hulu’s Joel Stillerman bowed out at the last minute due to illness.) The men were lured to Israel by a combination of Rosen and Avi Nir, the head of Keshet TV, which stages the conference, now in its fifth year.

“It’s always interesting to get outside our bubble and see what’s percolating in the world,” said Nevins.

The lineup was certainly a rare one — “I have to say, this is kind of crazy,” admitted Rosen at the top of the panel — but without a representative from streaming on the panel (or a woman, for that matter), the men all defended the viability of their own platforms in the light of increased competition.

“You can’t get your feelings hurt or hold a grudge,” said Newman. “Because you might lose to them today, but tomorrow they might be buying something from you.”

Bloys championed the curated approach that HBO offers, which he dubbed “artisanal television,” which creators are increasingly responding to. “This is probably the biggest thing a writer, actor, producer, director is going to do with their life,” he said. “A lot of their mental and creative energy is going into this. It’s helpful to be at a place where that experience is a priority.” He also defended weekly airings of series — versus binge-watching — as an important element in being able to participate in the cultural conversation. “I just think it’s crazy not to take advantage of this TV entertainment industrial complex,” he said, of media coverage of shows that roll out on a weekly basis.

Reilly insisted that new entrants like Apple and Facebook aren’t guaranteed success like Netflix. “It is not only not a foregone conclusion that the Netflix thing will be replicated. I think it’s highly unlikely so most of these entities will do that,” he said. Bloys agreed that having a head start gives his network an advantage. “That’s not to say someone else can’t do it, but the way we do things is based on having worked on many shows for many years and understanding how to launch shows and take care of shows,” he said. “It’s in our DNA. That’s not to say someone else can’t figure it out. But we’ve got a pretty good leg up on them.”

While their deep pockets will lead to a surge in investment in programming, Reilly is confident his ad-supported business can prevail. “There’s no doubt that the real stress that many businesses feel right now is going to be existential. They’re going to feel either pushed out or marginalized or eaten up or closed down,” said Reilly. “Smart people with resources will adapt and figure it out. I’m betting that we’re one of those.”

That’s a message he hopes to convey to the advertising community at the upfronts in May. “Our upfront message this year will really begin to lay the stepping stones for where we’ll go, particularly post merger on a more data-based product with a marketing partner, rather than buying our inventory,” Reilly said.

The confab also offered the execs not just an opportunity for them to reconnect with each other, but also the producers they often do business with, including Nir. “The main reason I’m going is to honor the company that has helped us with one of the most important shows that we’ve ever had,” Nevins told Variety ahead of the confab, of “Homeland,” now in its seventh season. “Homeland” is derived from the Israeli hit “Prisoners of War,” though the two series have diverged creatively — Claire Danes’ CIA officer Carrie Mathison, for example, doesn’t exist in the original. “It’s brilliant but very different from our show,” said Nevins.

The seemingly insatiable hunger for content has fueled more interest in series that can be imported to the U.S. “The world has gotten smaller, but TV has gotten bigger,” said Nevins. “I think American audiences are becoming more accepting of international shows — shows shot internationally, shows set internationally, and occasionally in a foreign language.”

Nevins recalled that in the early days of “Homeland,” there was concern about setting the show overseas. But now the series regularly shoots abroad, and even the political docu-series “The Circus” is going to be shooting internationally, Nevins revealed. Plus, “there are other things that I’m contemplating that are exotic,” he said.

While the execs all said that their goal wasn’t necessarily to secure new projects, they all praised Israel as a rich source of material. “I think it comes down to a nation of great storytellers,” said Nevins. “They’ve really figured out in the last decade how to make innovative television. There’s always been a great tradition of writing and storytelling for TV that’s really taken off in the last decade, but I think it’s pretty culturally ingrained.”

Merger mania was also on everyone’s minds at the confab, with a trial looming next week for the AT&T and Time Warner’s battle with the Justice Department and continuing lack of clarity on the power structure once Disney absorbs 21st Century Fox assets. “The market dynamics are changing,” said Reilly. “Some are very pessimistic about what that means. Others realize that with different resources and different combinations, it can unlock other possibilities. What Disney is attempting to pull off is a very big business and cultural overhaul. You can put a label on that as desperate or you can say that’s bold and charting the next path.”

Newman said he continues to be “bullish” about the pending Disney-Fox acquisition, even if his own fate is uncertain. “To be able to compete with these other companies like Netflix and Amazon and Apple who have incredible resources, it’s very challenging,” he said. “The only way to be able to do that is you have to have scale.”

And naturally, politics was also on everyone’s mind — both the turmoil in the Trump administration as well as the corruption charges looming against Israeli prime minister Benjamin Netanyahu. “I was reminded about what an amazing miracle Israel is, that it exists and prospers with so many neighbors hellbent on its destruction,” said Bloys.

Added Nevins, “America is always in this fight between isolationism and universalism. We’re watching that play out right now.”