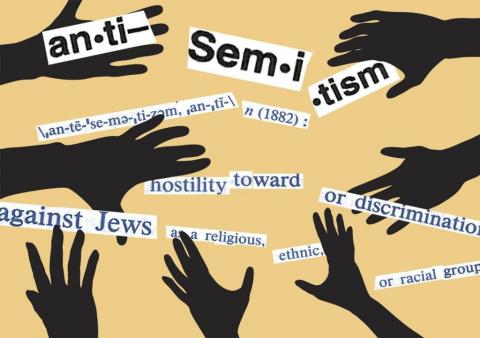 “Anti-Semitism among the intellectual elite of pagan antiquity began in Alexandria more than 2,000 years ago. This type of anti-Semitism – particularly among higher cultures, i.e., Egypt, Greece and Rome – focused on issues which seem to have a perennial resonance. In particular, the charge was made that Jews were anti-social. They did not eat and drink with their neighbors as was part of the Mediterranean ethos.

This ancient accusation of exclusivism and isolationism of the Jews has provided an infrastructure upon which various more serious charges have been built over the millennia.

“The anti-Semitic role of intellectuals continued throughout the centuries. The fathers of the church, particularly in the fourth century of the Christian era, laid the ideological infrastructure from which much of the demonizing of Jews, Judaism, and the Jewish people developed. They explicitly branded the Jews as Christ-killers, a deicidal people. This already has its beginnings in the gospels. The only intellectuals in Christian Europe during the Middle Ages were clergymen. For over a thousand years, many leading Christian theologians taught contempt toward the Jewish people. After World War II, French Jewish author Jules Isaac described this in detail.”

Professor Robert Wistrich holds the Neuberger Chair for Modern European and Jewish History at the Hebrew University of Jerusalem. Since 2002, he has been director of the Vidal Sassoon International Center for the Study of Anti-Semitism at that university.

“The perception of the allegedly satanic character of the Jews continued throughout the Middle Ages. Later in that period, the Jews literally became a ‘demonic abstraction.’ Almost all their actions were interpreted as being of extraordinary malice and perversity. Church reformer Martin Luther, was a man of considerable intellectual power. His denunciations of Jews are among the most violent in the history of anti-Semitic defamation.

“In the Catholic, Eastern Christian Orthodox and Protestant worlds, anti-Semitism became a widespread phenomenon. The Jews were defined by the churches as the ‘agents of the devil,’ and enemies of the faith. This demonization carried over into a rationalist, post-Christian ethos, acquiring a new secular vitality. For instance, the 18th century Enlightenment inscribed on its banners the revolt against the established church. It proclaimed the sovereignty of reason, humanity and universal ‘toleration.’ Yet it continued in the earlier anti-Semitic tradition. Its intellectual proponents turned their anti-Semitism against the Catholic Church itself. It was the Voltarian approach to the citadels of ‘superstition’ and in particular that of the Catholic Church and the Holy Scriptures. This included a total attack on the Hebrew Bible, the Jewish people, and Judaism as the source of everything that was wrong. He and other 18th century French philosophers proclaimed that the capital crime of the Jews was that they had invented God and monotheism, the worst thing that had ever happened to civilization. In other words, their sin was not having crucified Christ, but having given birth to him.

“The great German idealist philosophers of the 18th century, from Kant through Fichte and Hegel, were all anti-Semitic. So were the outstanding intellectuals who followed or opposed them, such as Schopenhauer, Nietzsche and the young Karl Marx. Nietzsche and Kant were less anti-Semitic than others. This tradition climaxed with Martin Heidegger, who many people consider the 20th century’s leading philosopher. His commitment to Nazism ran deep and affected his attitude toward Jews.

“Among the heirs of the Enlightenment traditions were the early French Socialists of the 19th century. With rare exceptions, they laid the groundwork for late 19th century French anti-Semitism. They included Charles Fourier, Pierre-Joseph Proudhon – founder of anarchism and a seminal figure in the French labor movement – and Alphonse Toussenel. The leading figure of French anti-Semitism at the time of the Dreyfus Affair was semi-intellectual Edouard Drumont, author of the best-selling work La France Juive (Jewish France). With approximately 100 editions, it out-sold all other books of the day in Fin-de-siècle France.

“Proudhon’s great rival and antagonist Karl Marx penned a work that Marxists always include in the pantheon of his writings, "Zur Judenfrage" (On the Jewish Question). Among the many pearls of intellectual inspiration in this work, one finds phrases like, ‘Mammon is the worldly god of the Jews,’ or ‘the present Christian world in Europe and North America has reached the apex of this development and has become thoroughly Judaized.’

“Anti-Semitism is by no means the sole province of the ignorant and uneducated. Mass movements such as Nazism and many forms of fascism, nationalism, and some types of socialism do have major components of anti-intellectualism. Yet these movements which are both anti-intellectual and anti-Semitic also have an intellectual basis. Among the inspirers of European fascism were thinkers like George Sorel, Giovanni Gentile, Ernst Jünger, Oswald Spengler and many others. ‘Hitler's Professors’, to use Max Weinreich's phrase, helped prepare the ground for Nazi genocide of the Jews.

“The intellectual demonization of Jews continues until the present despite sweeping changes which have taken place intellectually, socially and politically in European history. Anti-Semitism is by no means the sole province of the ignorant and uneducated. Many writers, artists, prominent journalists and academics are in the forefront of making odious comparisons of Zionism to Nazism and Israel to Hitler’s Germany. Portuguese Nobel Prize-winner Jose Saramago was just one of many. Yet they all fit into a lengthy tradition of intellectual Jew-hatred.”