Increase investment in research and development of green energy 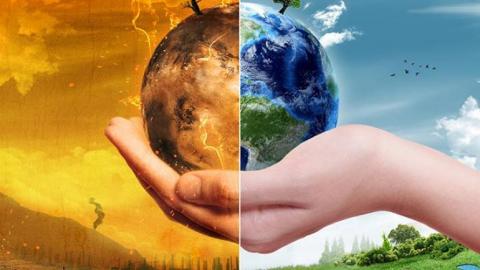 The global economy must be transformed immediately to avoid catastrophic climate damage, a new United Nations report declares. Climate economist William Nordhaus has been made a Nobel laureate. The events are being reported as two parts of the same story, but they reveal the contradictions inherent in climate policy—and why economics matters more than ever.

The IPCC says carbon emissions need to peak right now and fall rapidly to avert catastrophe. Models actually reveal that to achieve the 2.7-degree goal the world must stop all fossil fuel use in less than four years. Yet the International Energy Agency estimates that in 2040 fossil fuels will still meet three-quarters of world energy needs, even if the Paris agreement is fully implemented. The U.N. body responsible for the accord estimates that if every country fulfills every pledge by 2030, CO2 emissions will be cut by 60 billion tons by 2030. That’s less than 1% of what is needed to keep temperature rises below 2.7 degrees. And achieving even that fraction would be vastly expensive—reducing world-wide growth $1 trillion to $2 trillion each year by 2030.

The European Union promises to cut emissions 80% by 2050. With realistic assumptions about technology, and the optimistic assumption that the EU’s climate policy is very well designed and coordinated, the average of seven leading peer-reviewed models finds EU annual costs will reach €2.9 trillion ($3.3 trillion), more than twice what EU governments spend today on health, education, recreation, housing, environment, police and defense combined. In reality, it is likely to cost much more because EU climate legislation has been an inefficient patchwork. If that continues, the policy will make the EU 24% poorer in 2050.

Trying to do more, as the IPCC urges, would be phenomenally expensive. It is important to keep things in perspective, challenging as that is given the hysterical tone of the reaction to the panel’s latest offering. In its latest full report, the IPCC estimated that in 60 years unmitigated global warming would cost the planet between 0.2% and 2% of gross domestic product. That’s simply not the end of the world.

The new report has no comparison of the costs and benefits of climate targets. Mr. Nordhaus’s most recent estimate, published in August, is that the “optimal” outcome with a moderate carbon tax is a rise of about 6.3 degrees Fahrenheit by the end of the century. Reducing temperature rises by more would result in higher costs than benefits, potentially causing the world a $50 trillion loss.

It’s past time to stop pushing so hard for carbon cuts before alternative energy sources are ready to take over. Instead the world must focus on resolving the technology deficit that makes switching away from fossil fuels so expensive. Genuine breakthroughs are required to drive down the future price of green energy.

Copenhagen Consensus analysis shows a ramped-up green-energy research-and-development budget of around $100 billion a year would be the most effective global-warming policy. It would be much cheaper than the approach pushed by the IPCC, and would not require global consensus. Most important, it would have a much better chance of ameliorating temperature rises. Under the IPPC’s approach, by contrast, the costs would vastly outweigh the benefits. Instead, the over-the-top reception to the latest IPCC report means that we are more likely to continue down a pathway where the costs would vastly outweigh the benefits.