An Improbable Relic of Auschwitz 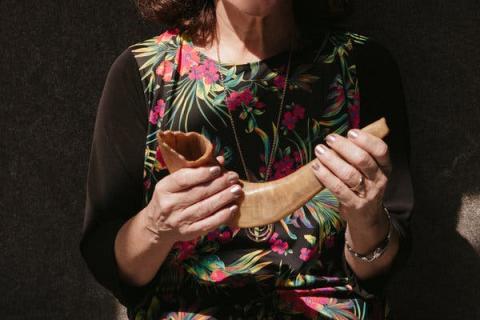 For years there have been fragmentary reports of almost unbelievable acts of faith at the Nazi death camps during World War II: the sounding of shofars, the ram’s horn trumpets traditionally blown by Jews to welcome the High Holy Days. These stories of the persistence of hope even in mankind’s darkest moments have been passed down despite limited evidence and eyewitness detail.

But could camp prisoners have found ways to sound these horns, piercing the heavens with sob-like wails and staccato blasts, without putting themselves in immediate mortal danger? Now a new account that addresses that question, and is embraced by several historians as reliable, has emerged from the daughter of an Auschwitz survivor, along with one of the secreted shofars itself.

Stay on top of the latest in pop and jazz with reviews, interviews, podcasts and more from The New York Times music critics. Dr. Judith Tydor Schwartz, an expert on the Holocaust, says her father, Chaskel Tydor, a longtime prisoner entrusted as work dispatcher at one of the more than 40 Auschwitz subcamps, contrived on Rosh Hashana 1944 to send fellow prisoners on a distant detail where they might safely, and privately, pray. He did not know that they carried something with them. But when they returned, she said, one confided to her father that a shofar had been produced and blown.

What is more, according to the account of Dr. Schwartz, who directs Holocaust research at Bar-Ilan University in Ramat Gan, Israel, her father was given the shofar for safekeeping in 1945 by a fellow prisoner as the Nazis emptied the camp and fled the advancing Russians.

On Monday, a week before Rosh Hashana, the Jewish New Year 5780, and 75 Rosh Hashanas since that clandestine act of faith, that ceremonial ram’s horn, about 10 inches long with a right-angled curve like a smoking pipe, will be installed at the Museum of Jewish Heritage near Battery Park in Manhattan. It is part of “Auschwitz. Not Long Ago. Not Far Away,” a traveling exhibition from Poland.

While it may never be possible to fully corroborate the story of the museum’s shofar, Holocaust historians say it is credible, and resembles other witness accounts of concentration camp shofars and is more detailed. Dr. Schwartz said she was loaning the shofar as additional evidence of the lengths to which imprisoned Jews went to practice their religion in the face of their German tormentors.

Their efforts included the mouthing of blessings during beatings and the trading away of bread rations during Passover when leavened products are forbidden. Abandoned oil drums at Auschwitz, the complex of extermination and forced labor camps in German-occupied Poland where about 1.1 million victims perished, were used in place of traditional huts for contemplation during the harvest festival of Sukkot. Rabbis in the camp decreed that even one minute spent inside was a sufficient mitzvah, or fulfillment of a commandment.

And then there were the shofars whose bleats are meant to variously evoke Abraham’s sacrifice of a ram in place of his son Isaac, the summoning of the Israelites to Sinai for Moses’s giving of the law, and the most fervent expression of Jewish hope — “next year in Jerusalem.”

An installation that opened last summer, “Through the Lens of Faith,” at the Auschwitz-Birkenau State Museum in Oswiecim, Poland, cites a 14-year-old prisoner, Wolf Greenbaum, who saw a rabbi visiting a doomed barracks at Birkenau on Rosh Hashana 1944 and blowing a smuggled shofar there.

Yad Vashem in Jerusalem displays a shofar fabricated in 1943 in the Nazi labor camp of Skarzysko-Kamienna. In Auschwitz, said Robert Jan van Pelt, a Holocaust scholar and chief curator of the Museum of Jewish Heritage’s exhibition, “We know from a number of eyewitness testimonies that shofars were blown.”

But where and how were they hidden? How did they make their way into the camps? And how did their sounding go unpunished? Accounts say guards were bribed and distracted by prisoners. “If it’s one thing I know from all the thousands of survivors I interviewed,” Dr. Schwartz said this week, “it’s that the impossible was possible, both to the bad and the good.”

Some shofars likely arrived in Auschwitz in mid-1944 with the 440,000 deported Hungarian Jews. Their belongings, left at the camp’s railway platform known as the ramp where arrivals were selected to live or die, were stockpiled at Birkenau in an immense goods warehouse dubbed “Canada” whose loot was often smuggled out. Schemes were hatched in the repulsive latrines, where guards disdained to enter.

Jack Kliger, the president and chief executive officer of the Museum of Jewish Heritage and the child of Holocaust survivors, said he remembers hearing from a friend of his parents that a shofar had sounded at Auschwitz. “If there’s an artifact that symbolizes the Jewish soul,” Mr. Kliger said, “you’d be hard-pressed to find something more indicative than a shofar.”

Curators say it will be placed in a case with another rare treasure — a prayer shawl, rescued by another prisoner of Auschwitz and on loan from the Amud Aish Memorial Museum in Brooklyn. The shofar will be blown at a ceremony Monday at the museum and at New Year’s services at congregations in Manhattan.

The Auschwitz exhibition opened last May and has so far drawn about 95,000 visitors. It is set to move out in January unless extended.

Dr. Schwartz’s story came to light after she visited the newly opened exhibition and mentioned her father’s account to the curator, Dr. van Pelt. She said she still had the shofar. Had it ever before occurred to her to offer it to a museum? “Oh, God no,” she said, “we used it.”

Her father, a modest man, never revealed much in interviews she conducted with him before he died in 1993 at 89. But until the end of his life, she said, “the Auschwitz shofar accompanied his wanderings.” He ran a travel agency in Manhattan, married his secretary, Shirley Kraus, who became the mother of Dr. Schwartz, managed uranium mines in Montana and South Dakota, and eventually moved back to Israel.

Born in 1903 in Bochnia, Poland, near Krakow, her father and his Hasidic family fled to Germany during World War I. Living in Frankfurt as Hitler rose to power and war loomed in 1939, he and his wife, Bertha, sent their young son and daughter to safety on a Kindertransport to Belgium. Mr. Tydor was arrested later that year and imprisoned in Buchenwald, one of the first and largest concentration camps, near Weimar in central Germany. From there in October 1942 he was transported to Auschwitz III, the forced labor camp also known as Monowitz/Buna where the authors Primo Levi and Elie Wiesel were also held. Within several miles stood the gas chambers and crematories of Auschwitz II, Birkenau.

In the camp he learned that Bertha, fleeing Germany for Poland, had been caught and murdered in Auschwitz, along with other family members. In despair, he was restrained from killing himself on the camp’s electrified wire. He was initially assigned to a construction detail carrying large sacks of cement, leaving him with a permanently disabled shoulder. But as an older prisoner with experience in the camps, he was designated a block secretary, responsible for assigning work details. By attaching names of the dead to some assignments, he was able to afford others relief in the sick bay, “enabling him to save hundreds of Jewish prisoners,” Dr. Schwartz said.

Around Rosh Hashana 1944, she said, he arranged to send some religious prisoners out where they might constitute a minyan, or quorum of 10 adults to conduct a prayer service. When they returned, he learned about the shofar’s sounding. “I was told of the person who had it but when asked he denied, maybe from fear,” Mr. Tydor told his daughter in a recollection quoted in one of her books.

In January 1945, the Germans hurriedly began dynamiting Auschwitz and emptying the camp as the Russians approached. Mr. Tydor and some 60,000 other survivors were herded on a 30-mile march to another subcamp. But the night before they left, she said, another prisoner came up to him — “my father never said who it was” — and pressed on him a rag-wrapped object. The shofar. Her father told her the man had said: “I’m going to die on this march. If you live, take this shofar. Tell them we blew the shofar at Auschwitz.”

Mr. Tydor survived the march and ended up back in Buchenwald where he was liberated by the American Army on April 11, 1945. Later that year, he joined a group of former concentration camp prisoners and other freed Jews aboard the steamship Mataroa to Palestine, then under British mandate, and soon to become Israel. Off the coast of Haifa on Rosh Hashana 1945, he blew the shofar.