Impact of Drought Felt in Israel 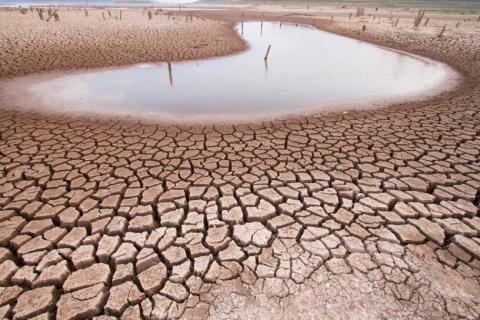 The Banias Stream in the Golan Heights, whose cold waters have refreshed generations of hikers, is finding it difficult to do just that nowadays without a little help. Anyone who passes by the stream in the area of the Horshat Tal National Park in the far north of Israel can see the pipes pumping water into the stream from a nearby groundwater well. This is the “drought well” drilled especially for this purpose in an attempt to increase the flow in the stream during the hot summer days.

The classic aridity of the Middle East is evident almost everywhere in Israel at this time of year. Both the flora and the fauna and the nature sites where they are found, have developed the endurance and ability to adapt to intense heat and lack of rain. But the climate change in recent years, along with increasing overconsumption of water resources, have made life much harder even for those plants and animals that were used to a long, hot and dry summer.

From the streams of the Golan in the far north to the springs in the Negev Desert in the south, it is hard for nature to get by without some human help these days. Man is the one who has taken the water and is now trying to give some of it back to those who need it the most.

If trees have consciousness and feelings as some experts claim, then the beautiful Oriental plane trees (“dolev” in Hebrew) in the Betzet Stream nature reserve certainly feel embarrassed about their present condition. The Israel Parks and Nature Authority has been forced to transfer water through a pipe into the reserve to keep them from drying out and dying.

In the south, the animals living in the desert are finding it much harder to fend for themselves during the arid summer than in the past. For example, in the Akev Spring in the central Negev, wild animals and humans are competing for access to the spring. The Israel Nature and Parks Authority has been forced to provide the animals with a water through near the spring.

But such help is not available everywhere. The springs in the Jerusalem Hills have dried up in some places and the trees are showing signs of stress. The situation is much the same in the Pardes Hannah area.

Data from the Israel Meteorological Service show that it really is getting hotter in Israel. Between 1950 and 2016, and particularly since the late 1980s, a clear trend of warming has been measured all over Israel. This warming has averaged 0.6 degrees Celsius per decade, which translates into an average rise in temperatures of almost 2 degrees over a 30-year period.

In addition,over the past two decades there has been an increase in the frequency of heat waves, in which for three consecutive days the temperatures is at least 6 degrees higher than the average daily temperature for the season. This summer has been cooler than 2017, but the past few years have been exceptionally hot in general.

The data on rain in Israel are also a cause for concern. Even when the rain does fall, it is often in short but heavy bursts that make it difficult for the ground to absorb all the rainfall properly and trickle down into the groundwater levels.

This year the drought continued in the Sea of Galileedrainage basin and some other areas where Israel’s groundwater reserves are situated. The flow of water in the tributaries of the Jordan River was less than half the multi-year average for this season. This explains the sad look of the pools at the Banias, where the rocks in the pools have been exposed because of the drop in water levels.

The cumulative effect of drought is evident in nature. Several tree experts note the growing signs of distress and even severe dehydration verging on death of trees in different regions, following a number of especially hot and dry years.

Seasonal winter pools in the coastal plain also show the impact of climate change. Ordinarily these pools dry out every summer, but refill when the winter rain falls, reviving their plant and animal life. But the development and construction in the heavily populated coastal region has reduced the areas that feed the pools with water. The winter pools in Holon next to the licensing bureau has an abundance of parking places and almost no room has been left for the frogs that used to populate the pools. Anyone who grew up near there still remembers the large pool that formed every winter, and which has been shrinking over the years.

Some species have been more successful at coping with arid conditions. These include wild plants, and in particular, sea squills (Drimia maritima) now at the peak of blooming. The germanders are another species that is blooming now from the Galilee and Mount Carmel and farther south near the coast. These are plants have a protective covering that shields the leaves, stems and buds from the sun’s rays and reduces the plant’s loss of water.

Migratory birds have also not given up on Israel as a waystation, and Israel can still provide them with places to rest, drink and feed. The bright pink flamingoes that checked in for a long rest stop in the salt pools in Atlit are just one recent example.

If the forecasts of climate change and population growth become a reality, the strain on water sources will only increase while the water supplied by natural sources continues to shrink. More efficient use of water and increased desalination could reduce this pressure on natural water resources, ensuring that future generations can also swim in the Sea of Galilee and wade in the streams of the Golan Heights – and see healthy trees, too.