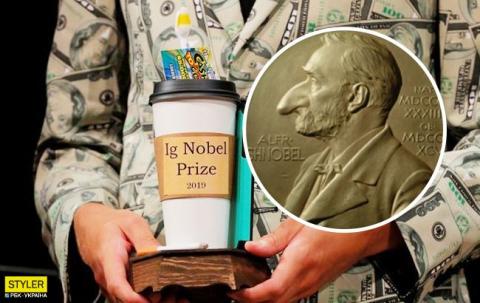 There comes a time in a scientist’s life when the surest route to global fame involves a bevy of naked French postmen with thermometers taped to their testicles. At least that is the case for Roger Mieusset, a fertility specialist at the University of Toulouse, whose unlikely studies have earned him one of the most coveted awards in academia: an Ig Nobel prize.

Unlike the more famous – and rather more prestigious – Nobel prizes, which will be announced in Scandinavia next month, the Ig Nobels honour work that “first makes people laugh, and then makes them think”.

Ten awards were handed out on Thursday at the annual ceremony at Harvard University in the US, where an eight-year-old girl was on duty to enforce the one-minute rule on winners’ speeches with the devastating line: “Please stop, I’m bored.”

Now in their 29th year, the awards included a chemistry prize for Japanese scientists who calculated how much saliva a typical five-year-old produces in one day (half a litre); an engineering prize for an Iranian inventor’s nappy-changing machine; and an economics prize for Dutch researchers who discovered that banknotes can spread infectious microbes, and none more so than the Romanian leu.

Italian scientists won the medicine prize for pursuing the idea that pizzas offer protection against death, a question they never quite managed to answer.

Mieusset and his accomplice, Bourras Bengoudifa, recruited French postmen to settle a mystery that has received precious little attention: whether a man’s testicles are both the same temperature. Having crunched the numbers from delicately placed sensors, Mieusset only deepened the mystery. According to his studies, the left one is warmer, but only when a man has his clothes on. Mieusset has invented heated pants for men to wear as an aid to contraception – he appears to be the sole purveyor of the unorthodox intervention.

Britain’s pride was upheld by Francis McGlone, a researcher at Liverpool John Moores University, who shared the Ig Nobel peace prize. As part of an international team, McGlone helped map out which parts of the body are most pleasurable to scratch. The ankles ranked highest, the researchers found, and then the back and forearm.

“I was over the moon when I heard. It’s nice for all of us. It’s an honour,” McGlone said on hearing he had won. “The thing that’s fascinated me for a long while now is why is scratching an itch so bloody nice?”

But there is a serious side to the research, he said. “People always laugh about itching, but chronic itch is devastating. People with chronic itch will scratch until it bleeds because the pain is preferable to the itching.”

By understanding which parts of the body are most prone to itch, and those which are most susceptible to relief, scientists hope to find new treatments for the condition. McGlone, who could not attend the ceremony, accepted the award in a video message recorded with a homunculus on his shoulder.

As is standard for the annual event, winners pay their own way to Harvard, where the prizes are handed out by bona fide Nobel laureates. The winners each receive a cash prize: a now-obsolete $10tn bill from Zimbabwe.

Patricia Yang and David Hu, both engineers at Georgia Institute of Technology in Atlanta, celebrated their second Ig Nobel prize at the ceremony. The researchers bagged their first in 2015 for discovering the “law of urination”, which states that all mammals empty their bladders in about 21 seconds. This year, as part of a larger team, the two share the physics prize for working out how wombats make cube-shaped faeces. The feat, thought to be unique in the animal world, helps them construct stable piles of dung to mark their territory. Contacted about the prize, Yang said: “It solidifies my belief that curiosity brings joy and surprise in science.”