‘I am Anne Frank’: a book on the Holocaust for young readers 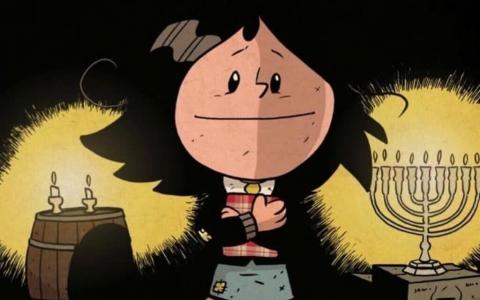 In time for the pandemic’s first Hanukkah, a children’s book about Anne Frank zooms in on resilience and optimism during tumultuous times. “I am Anne Frank” was written by Brad Meltzer and illustrated by Chris Eliopoulos for the “Ordinary People Change the World” series.

Prior installments in the best-selling series also penned by Meltzer and Eliopoulos include books on Amelia Earhart, Walt Disney, and Gandhi. “Last year had the highest increase of anti-Semitic incidents in 40 years,” said Meltzer. “Millennials don’t know basic facts about the Holocaust. Our kids need hope right now. That’s Anne Frank’s main message — and the message of the book,” Meltzer told The Times of Israel.

As with most accounts of the diarist’s short life, ‘I am Anne Frank’ opens with the Nazis’ anti-Jewish measures in Amsterdam. The harsh edicts contrast with the joyful scene of Anne’s 13th birthday party at home. Within weeks of that gathering, the family “disappeared” into hiding.

To make the heavy subject more palpable, the book overtly consoles and comforts its readers. Special attention is given to the Dutch “helpers” who sustained the Jews in hiding. Some of their acts of heroism are described, including Miep Gies supplying the “Secret Annex” with both food and friendship.

Of the holidays celebrated in the “Secret Annex,” Hanukkah and Christmas get the most attention in Anne’s diary. Near the end of “I am Anne Frank,” a shabby-looking Anne stands next to a lit Hanukkah menorah. On a barrel to her right, Shabbat candles pierce more of the darkness:

You can always find light in the darkest places.

That’s what hope is.
It’s a fire within you.
You decide when to light it.
And when it burns bright…

As with other kid-friendly books about Anne Frank, the final eight months of the diarist’s life are lightly touched upon. The Nazis’ raid on the “Secret Annex” is not depicted, nor is Bergen-Belsen, where the diarist and her sister perished during the war’s last spring.

After the main narrative, there’s a cheerful image of adults and children in line to visit The Anne Frank House in Amsterdam. Several of them recap the book’s moral take-aways in the context of Nazi Germany’s “Final Solution.” One visitor notes that saplings from the chestnut tree Anne wrote about have been planted all over the world since 2010, when a storm brought the tree down.

In an interview with The Times of Israel, Meltzer spoke about “I am Anne Frank” and his other books for the “Ordinary People Change the World” series.

Do you remember your own introduction to the Holocaust? If so, did those memories inform how you wrote the book?

As someone who is Jewish, I actually don’t remember my introduction to the Holocaust. It has oddly always been there — a part of my DNA. So I didn’t write the book I wanted when I was young. I wrote the book I wanted for my children. That book didn’t exist. And the real secret weapon for this book was our artist, Chris Eliopoulos. He’s the reason so many kids have reacted to the book. He brings Anne to life again and shows kids that she’s not “Anne, that girl from the Holocaust” — she’s “that girl, who’s just like me.” That’s the key. Letting our kids see that Anne was just like them.

Why was this the right time to publish another Anne Frank book for children? What do you see as the diarist’s biggest accomplishment?

Look around at the world. Last year had the highest increase of anti-Semitic incidents in 40 years. Millennials don’t know basic facts about the Holocaust. Our kids need hope right now. That’s Anne Frank’s main message — and the message of the book. Interestingly, she’s the first hero we’ve done who is never “aware” of her eventual accomplishments. But they still endure. I want my kids to know that even in the darkest places, they can always find light.

How do you “walk the line” in terms of being kid-friendly, while also getting across the scope of the Holocaust?

The book is for kids who are between five and 12. That’s a big range. And when you’re writing for those littlest ones, we spoke with the experts we got from the Holocaust Memorial Museum and the Anne Frank Center for Mutual Respect.

In the end, we decided to include the information, but to put it there in a way where a parent could decide (depending on the age of their child) what was the more appropriate way to deliver that information. We do say six million Jews died in the Holocaust. That was a must. But as for Anne’s actual death, the book is about how she lived. For that reason, we included her death, but put it in the timeline so that parents (who know their individual kids) could decide what was best.

You also recently wrote a book about Benjamin Franklin for the series. How do you choose your topics, and what is next for you?

These books have always been for my own kids — to give them better heroes and arm them with lessons of resilience and compassion. So these are books 21 and 22 in the series. The rise of anti-Semitism… the way religious, ethnic and racial minorities are regularly targeted… it’s impossible to ignore — and I want my kids to see and find strength from Anne Frank’s lessons.

For Benjamin Franklin, I wanted to show my kids ingenuity and the value of a free press. For both heroes, those sadly are lessons we all need today. The next book “I am Frida Kahlo.”

Were there any aspects of the story that you wanted to elevate?

There’s a war on immigrants and minorities going on in America. Anyone who looks different, thinks different, acts different is being labeled as “those people.”

As a Jew, this book is how we fight back. We’ve seen that thinking before. So it was very important to show Anne’s attempts to leave her country, to see the immigration office — so millions of kids can realize the impact of those decisions. As we all know, especially as Jews, if you’re silent, you’re complicit. Never forget.