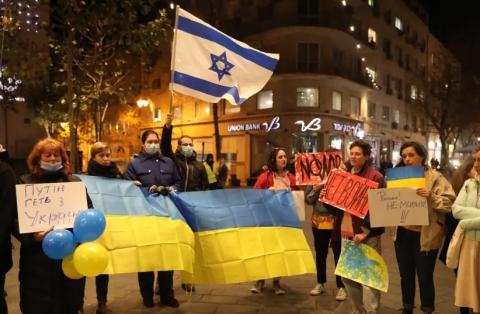 Israelis from Russia and the Former Soviet Union rallied in Israel against the Russian invasion of Ukraine, as the sun set on the first day of the war on Thursday. At the Russian Embassy in Tel Aviv, 200 protesters, mostly from a Ukrainian background, waved Ukrainian flags and chanted, “Putin is a murderer, he is violent and dangerous.”

Some 30 activists also went to Jerusalem’s Zion Square to protest. They came from varied backgrounds but said they all had friends and family impacted by the conflict, which brought them to the same conclusion: the war has to stop.

Rachelle, from Moscow, said that her friend in Kyiv “woke up from an explosion this morning” to a nightmare. “My friend in Ukraine tried to get to the border,” said Anastasia, a former journalist from Russia. “He has a baby but couldn’t get into Poland.” She explained that they were not letting men of fighting age leave the country.

Mark Rosenkranz’s wife is from Kyiv. He says her family has been hearing explosions, and that the situation is “as if they were in the Gaza periphery.”

Valeria has friends and family in both Russia and Ukraine, and said it is not uncommon for former Soviet bloc Jews to have mixed heritage, and therefore mixed feelings. “I’m glad to be in Israel, because I would be torn to be in Ukraine or Moscow,” Valeria said. “I’m glad my grandmother isn’t alive to see this. She lived in Donetsk and loved Moscow. She would have been heartbroken.”

Valeria said she was “worried about friends and family in Ukraine. My friends in Russia are also against the war, but they can’t protest. They don’t want to go to jail.”

Others at the rally shared that many of their relatives wanted to protest, but couldn’t due to restrictions in Russia. “Half my family is against what Putin is doing,” said Anna, originally from Moscow. “The rest don’t want to think about it.” “We’re like citizens from North Korea or Iran,” said Rachelle. “Our freedom of speech has been taken away. In the past, protesting wasn’t easy, but in the last few years the crackdowns have been harder.”

She said that she had “friends who have protested in Russia and have gone to jail,” so even though she knew the situation was different in Israel, “it made me a bit afraid to speak here.”

On Thursday night, there were reports of protesters being arrested in Moscow. Even though she was able to join the rally, Rachelle said, “We feel helpless. We want people to know that we don’t support the war.”

ANASTASIA AGREED, saying she felt “as if we didn’t do enough. Maybe if we had protested more for [Alexei] Navalny, we could have done something,” she said, referring to the Russian opposition leader and anti-corruption activist who has been repeatedly arrested and was poisoned under mysterious circumstances. “The situation is that people don’t know what they can do,” said Anna.

Many of the protesters in Jerusalem called Putin insane and characterized the war as a needless conflict with a neighbor. “People from Ukraine and Russia are really against the war,” said Rosenkranz. “It’s not a war of nations. It’s the war of one person who has gone crazy.” “It hurts me that the dictatorship of Putin is doing to our neighbor with whom we share so much history,” said Evgeny Berenstein.

Not all Israelis from the former Soviet Union share the same opinions as the Zion Square protesters.

Putin was perfectly in his right to regain control of Ukraine, said Dan, a Jerusalem resident originally from Belarus who immigrated to Israel in 1991. He likened the situation to the Israeli-Palestinian conflict. “What if Israel had given the Old City to the Palestinians in 2000, and now the PA [Palestinian Authority] was about to join an alliance with Hezbollah and Hamas?” he said. “That would put an enemy right at the doorstep of Israel. That’s how Russia feels about Ukraine joining NATO, and placing their influence right up against Russia.”

He said that Ukraine was historically Russian territory, and has regularly prodded and attacked Russia since it gained independence in 1991.

“There’s no right for Russia to start a war, just like there’s no right for Ukraine to fire artillery into Donetsk,” said Eliyahu, also from Belarus. “There is a right [for independence], because most people there are for it and aren’t Ukrainian, and it was Russia first, not so long ago. I’ve encountered a lot of Western Ukrainian antisemitism and fascism when visiting. I think they deserve what’s happening.

Eliyahu added that it is “a shame that war has started and they couldn’t solve it diplomatically.”

Some of the protesters at Zion square said they believed that the situation could still be solved diplomatically, but that Israelis and the state need to speak up. “I feel that Israel hasn’t really responded on the issue, even though it’s like Poland at the beginning of World War II,” said Berenstein.

Other protesters had dire warnings for what might happen if the conflict continues. “It’s dangerous,” said Rosenkranz. “You don’t know what other states might do... In our region, it’s Iran who might try to take advantage of the situation,” “I think it’s the beginning of something bigger,” said Alex, who only gave his first name. “Ukraine is just the first step. It’s part of an imperialist agenda, and it’s not just me who thinks that way. And we know how [imperialism] ends.”