Humans have a natural lifespan of only 38 years 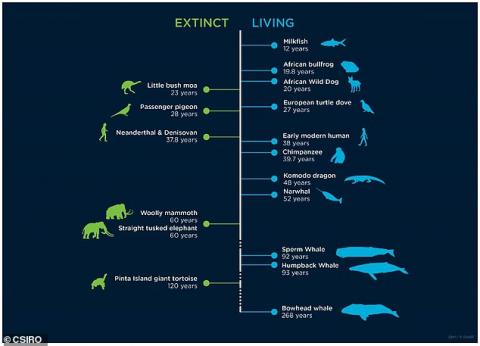 Humans have a maximum natural lifespan of only 38 years, according to researchers, who have discovered a way to estimate how long a species lives based on its DNA. Scientists at Australia's national science agency have developed a genetic 'clock' computer model that they claim can accurately estimate how long different vertebrates are likely to survive - including both living and extinct species.

Using the human genome, the researchers found that the maximum natural lifespan of humans is 38 years, which matches anthropological estimates of lifespan in early modern humans. They found Neanderthals and Denisovans had a maximum lifespan of 37.8 years, similar to modern humans living around the same time. The reason the life expectancy of modern humans is more than double that length is down to advances in living standards and modern medicine, according to the researchers.

'Our method for estimating maximum natural lifespan is based on DNA, said Dr Mayne, of Australia's government science agency CSIRO (Commonwealth Scientific and Industrial Research Organisation). 'If a species' genome sequence is known, we can estimate its lifespan. Until now it has been difficult to estimate lifespan for most wild animals, particularly long-living species of marine mammals and fish.'

As well as humans and human ancestors, the researchers tested their genetic clock on the genomes of other vertebrates, both living and extinct. They found that the bowhead whale, which is the longest-living mammal on Earth, can live for 268 years - almost 60 years longer than previously believed. This information tells us that these some of these Arctic mammals alive today may have been born before Queen Victoria even came to the throne and around the time Captain Cook first arrived in Australia.

It would explain why a bowhead whale found by Eskimos in 2007 had part of an antique harpoon lodged inside it, thought to have been made in the 19th century. The CSIRO team took genomes of animals with known lifespans from public databases such as NCBI Genomes and the Animal Ageing and Longevity Database.

Scientists worked out animals’ lifespan by looking at a chemical process called ‘methylation’ which switches genes on or off. As living things age, this goes haywire, with errors creeping in on specific genes, which can be used to work out how old an animal was when it died.

Benjamin Mayne and his colleagues used the genomes of 252 vertebrate species with known lifespans to identify the 42 genes that could help predict other lifespans. For example, using the genome of the African elephant and its average lifespan of 65 years as a reference, the authors used their model to estimate that both the woolly mammoth and the straight-tusked elephant had a lifespan of 60 years.

The model estimated the lifespan of the extinct Pinta Island giant tortoise was 120 years. Its genome is known from the last surviving member of the species, known as 'Lonesome George', whose death in the Galapagos Islands seven years ago made them extinct. Understanding the natural lifespan is important for conservation, biosecurity and wildlife management, said the researchers.

It also provides a more accurate way of calculating lifespan than previous methods that involved observing how long animals live in the wild, and could help to work out animals' risk of extinction. 'There are many genes linked to lifespan, but differences in the DNA sequences of those genes doesn’t seem to explain differences in lifespan between different species,' Dr Mayne said. 'Instead, we think that the density of a special type of DNA change, called DNA methylation, determines maximum natural lifespan in vertebrates. DNA methylation does not change a gene’s sequence but helps control whether and when it is switched on.

'Using the known lifespans of 262 different vertebrate species, we were able to accurately predict lifespan from the density of DNA methylation occurring within 42 different genes. 'These genes are likely to be good targets for studying ageing, which is of huge biomedical and ecological significance,' he said.