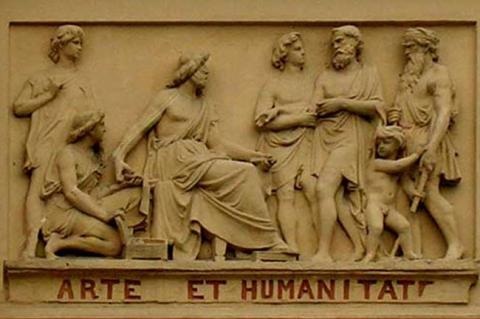 The humanities division at Harvard University, for centuries a standard-bearer of American letters, is attracting fewer undergraduates amid concerns about the degree's value in a rapidly changing job market. A university report being released Thursday suggests the division aggressively market itself to freshmen and sophomores, create a broader interdisciplinary framework to retain students and build an internship network to establish the value of the degree in the workforce.

This "is an anti-intellectual moment, and what matters to me is that we, the people in arts and humanities, find creative and affirmative ways of engaging the moment," said Diana Sorensen, Harvard's dean of Arts and Humanities. The division needs to show "what it is our work does so they don't think we're just living up in the clouds all the time."

Universities' humanities divisions and liberal-arts colleges across the nation are facing similar challenges in the wake of stepped-up global economic competition, a job market that is disproportionately rewarding graduates in the hard sciences, rising tuition and sky-high student-debt levels. Among recent college graduates who majored in English, the unemployment rate was 9.8%; for philosophy and religious-studies majors, it was 9.5%; and for history majors, it was also 9.5%, according to a report this month by the Georgetown Public Policy Institute that used data from 2010 and 2011.

Students have taken note. In 2010, just 7% of college graduates nationally majored in the humanities, down from 14% in 1966. At Harvard, humanities majors have fallen to 20% in 2012 from 36% in 1954. In the last decade, the decline in humanities students at Harvard has been particularly pronounced, with one-third fewer prospective freshmen expressing interest in the field.

Shannon Lytle, a 19-year-old from Youngstown, Ohio, who is heading into his sophomore year at Harvard, considered majoring in history, but instead he will pick computer science when he declares a concentration in a few months. "People say you should do what you love," Mr. Lytle said during a break from his job giving tours of the Ivy League campus Wednesday. "But the reality is that it's kind of a tougher economic time, and we do have to worry about living after graduation. I don't want to be doing what I love and be homeless," he added.

The weaker job prospects in certain fields have led four Republican governors to call for funding cuts at departments in public universities that they don't believe prepare students for the workforce. "If you want to take gender studies, that's fine, go to private school," North Carolina GOP Gov. Patrick McCrory said in a radio interview in January. "But I don't want to subsidize that if it's not going to get someone a job."

School presidents and administrators at liberal-arts colleges have already started to take a more job-oriented approach to a liberal-arts education. At Wake Forest University, the career-service department has been integrated into the curriculum. Professors are now expected to help students connect the curriculum to employment opportunities in the workforce, said Andy Chan, vice president for Personal and Career Development at the school. "We're engaging every student from their first day on campus to maximize their career development," said Mr. Chan.

At Harvard, students today are understandably focused on the job market and on earning money, said Homi Bhabha, director of the Humanities Center at Harvard. "That clearly throws a shadow on people's enthusiasm," said the bespectacled professor in an interview in his book-filled office on the leafy campus. Mr. Bhabha said he didn't give much weight to criticism from some elected officials who carp that young people need to go into fields that are supposedly more useful. "I think that's because they have a very primitive and reductive view of what is essential in society," he said. "There are jobs, and even in business, the humanities play a major role."

In fact, to hear Mr. Bhabha and Harvard tell it, the outlook is actually good for humanities majors. They have a high acceptance rate into law and medical schools, and are in demand in business world for critical writing and thinking skills, Mr. Bhabha said. The report noted that Harvard's humanities division had in some ways cut itself off from the job market—training students to be academics rather than "truly educated citizens" of the broader society. "Those of us committed to criticism and critique might recognize a kernel of truth in conservative fears about the left-leaning academy," according to the report. "Among the ways we sometimes alienate students from the humanities is the impression they get that some ideas are unspeakable in our classroom."