How will the Russia-Ukraine war reshape the world? 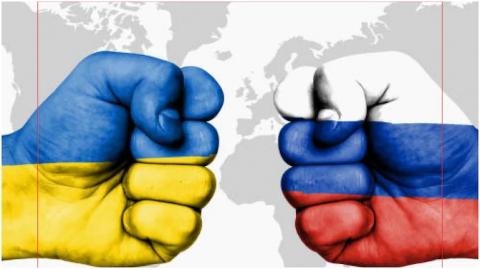 It’s the big question keeping the world on edge: How does this end? Russian President Vladimir Putin’s war of choice in Ukraine is a world-historical event, marking the final act of the post-Cold War period and the start of a new era, yet unwritten.

The spectrum of possible outcomes ranges from a volatile new cold or hot war involving the United States, Russia, and China; to a frozen conflict in Ukraine; to a post-Putin settlement in which Russia becomes part of a revised European security architecture. With the West leveling unprecedented sanctions against Russia in record time and the real potential for a descent into nuclear war, we are in uncharted territory. It is difficult to see how Putin “wins.” But he cannot accept defeat.

What follows are four scenarios for how this war could conclude and the alternative geopolitical futures that might result, transforming international relations over the course of the next two to three years. We develop scenarios not to predict the future but to help decision makers imagine what could happen next and devise ways to prevent the worst case. The only certainty about the war over Ukraine is that all existing certainties have been shattered.

Russia’s war effort in Ukraine drags on for more than a year, as the civilian death toll continues to rise. Ukrainian President Volodymyr Zelenskyy remains in Kyiv, even with his life in persistent danger from Russian-directed assassination attempts.

In 2023, global oil prices stay over one hundred dollars a barrel, as Europe struggles to wean itself off Russian energy. The harsh winter in 2022-2023 has prompted European Union (EU) countries to begin rationing energy supplies, depriving industries of needed power and forcing schools to close during the worst weather because of the difficulty of heating classrooms. Europe plunges into recession. Even though the United States is spared a recession, the high price of gasoline continues to anger Americans. The Democratic Party loses control of both the Senate and House of Representatives in the November 2022 midterm elections, dramatically weakening US President Joe Biden’s ability to advance his policy agenda.

Russia, meanwhile, is in dire condition. Despite the Russian Central Bank’s deft management of an impossible situation, inflation climbs rapidly amid interrupted supplies of basic food staples and less-than-anticipated Chinese assistance. Russia’s military hierarchy understands that the war in Ukraine is unwinnable, and there are rumors of a loose coalition of irate oligarchs and military and intelligence siloviki with designs on forcing Putin’s ouster and installing former President Dmitry Medvedev in his place. The country’s intelligence service, the FSB, averts a palace coup, and Putin sends dozens of generals to a prison camp.

In early 2023, with the warring sides stalled and no end in sight to the low-intensity conflict, French President Emmanuel Macron and German Chancellor Olaf Scholz grow anxious to mediate a ceasefire. Almost ten million Ukrainians have emigrated to the (EU), where the deepening recession stokes public opposition to admitting more refugees. European leaders are prepared to offer incentives to Putin: the lifting of some sanctions once Russian troops end their fighting and start reducing their presence in Ukraine.

Under pressure at home, Putin pulls back a portion of his troops from Ukraine but keeps enough there to continue to control much of Ukraine’s coastline, ensuring a land bridge between the Donbas region and Crimea. French and German leaders are disappointed with the partial Russian withdrawal and reciprocate by doing away with sanctions only on those oligarchs who have reportedly been involved in plots to remove Putin. The EU also temporarily lifts an embargo it had imposed on Russian energy, though principally to help with the recovery of European economies. The Biden administration does not eliminate its own energy embargo. But in the hope that oil prices will start to decline with the presidential election cycle beginning in mid-2023, it turns a blind eye to the importation of Russian energy by other countries, including European allies.

Talks with Putin, led by France, Germany, Turkey, and Israel, are protracted. Moscow wants assurances that NATO will stop providing arms to the Ukrainian resistance and will rescind its 2008 pledge to admit Ukraine and Georgia to the Alliance. The United States won’t give in, even though Zelenskyy has conceded for some time that Ukraine’s dream of NATO membership is no longer feasible. The Ukrainian president will accept neutrality so long as the five permanent members of the United Nations (UN) Security Council (the United States, Russia, China, the United Kingdom, and France) plus Germany and Turkey become guarantors of Ukraine’s security. Zelenskyy is unwilling, however, to concede independence for his country’s breakaway regions of Donetsk and Luhansk.

With negotiations stuck on these points, Washington wants to double down on providing military supplies to Ukrainian forces while France and Germany still hope to reach a détente with Moscow and worry about Putin sending back the troops he has withdrawn. Poland and other Central European nations back the US position, particularly since Zelenskyy does not want the pressure on Russia to ease. He insists that if Ukrainian forces get more military assistance, they have a good chance of repulsing all remaining Russian forces.

As the US presidential campaign heats up while the fighting in Ukraine does as well, the Biden administration convenes a special NATO summit to decide next steps. Both the United States and its European allies believe the conflict’s current course is not sustainable. EU publics are increasingly angry about the cost of housing and the challenge of supporting millions of Ukrainian refugees amid a recession. In the United States, the administration fears a wipeout for Democrats in the 2024 elections as gas prices and inflation remain elevated and the economy underperforms. In the Middle East, Egypt has been rocked for two years by ever more violent food riots as the price of bread soars. Europeans fear a repeat of the Arab Spring with more instability, terrorism, and refugees. The United States and European countries are also finding it harder to enforce other countries’ compliance with Russia sanctions. Russia might not sell as much oil and natural gas to Europe as it once did, but it is finding plenty of buyers for discounted Russian energy elsewhere. Western leaders worry that the initial shock of the sanctions has worn off and that most ordinary Russians are learning to adapt to them. Having survived elite plots to replace him, Putin has reasserted control over the country.

At the NATO summit, Biden announces that the West has two options. The first is to pressure Zelenskyy and Putin into a ceasefire and limited peace agreement, though this would carry the risk of a fragile peace. The second is for the West to step up its military assistance to Ukraine in the hope that a Ukrainian military breakthrough will force Putin to make major concessions, though this would incur escalation risks such as Russian targeting of supply depots along the border with Poland or Romania. While Biden may only glimpse this at the time, the former option is more liable to lead to something like our second scenario (“a double cold war”) while the latter option is more likely to bring about situations akin to our third (“a nuclear apocalypse”) or fourth (“a brave new world”) scenarios.

A new world, whatever the scenario

The scenarios above illustrate the various ways geopolitics could be transformed depending on what trajectory the conflict over Ukraine takes next. But in several respects the geopolitical chess pieces are already in different positions on the board than they were before hostilities erupted.

Europe, for example, will never be the same again. It has assumed a more robust role in this crisis than many would have predicted beforehand, with Germany turning away from seventy-five years of relative pacifism and the European Union (EU) uniting to phase out its dependence on Russian energy. More broadly, the war has provided a new impetus for closer collaboration among most democracies. Even if there is a ceasefire and peace settlement, Russian decline has accelerated. In the United States, the Biden administration’s plan for pivoting to Asia to counter China has been upended. The United States will increase its attention on—and flow more resources and forces to—Europe for the remainder of Biden’s term. There is more of an open question when it comes to China: Given Xi’s closeness to Putin, the war in Ukraine offers Beijing an opportunity to become a peacemaker. But will it grasp the opportunity?

This section examines the enduring changes in the world that are evident so far and how our scenarios could further impact the movement of these repositioned chess pieces.

lobal crises typically end by either ushering in a peace that lasts for decades or setting the stage for a succession of recurring conflicts. The 1919 Treaty of Versailles, which John Maynard Keynes equated to a “Carthaginian peace” crushing Wilhelmine Germany, ostensibly ended World War I but actually laid the groundwork for the even deadlier World War II. By contrast, the 1814-1815 Congress of Vienna, which included not just those that defeated Napoleon but also France, ended twenty years of conflict and brought about almost a century of peace among the major European powers.

As our scenarios show, if the West wants to build a more permanent peace, it needs to have strategic empathy, grasping the perceived interests, red lines, and minimal requirements of both Ukraine and Russia in order to find a solution that reconciles differences for the long haul.

Mathew Burrows and Robert A. Manning