How the Russia-Ukraine Crisis Is Playing in Israel 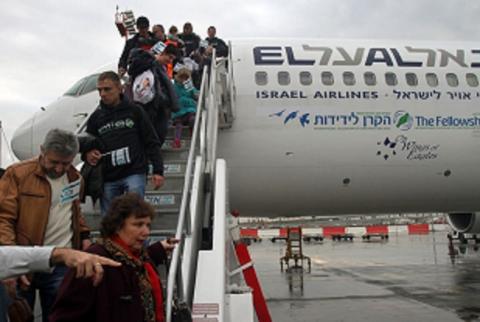 Born in Ukraine, Anna Zharova moved to Israel 22 years ago. Like many new immigrants, she focused on learning Hebrew, making new friends and integrating into Israeli society – and naturally lost interest in what was happening in her country of birth.

That all changed eight years ago when Russia invaded and annexed the Crimean Peninsula, sparking the most serious East-West crisis since the Cold War. “When that happened, I said: ‘I can no longer stay on the sidelines,’” recounts the 41-year-old, “and I have been active ever since.”

Zharova, who worked for many years for the Jewish Agency as an expert on informal education, is the co-founder and CEO of the Israeli-Ukrainian Alliance, an organization that promotes social, cultural and business relations between the two countries.

She also co-founded Israeli Friends of Ukraine, a group that has organized protests outside the Russian Embassy and provided humanitarian aid to Ukrainian victims of the conflict. In recent years, it has also organized Ukrainian cultural fairs in Israel.

“We see what Russia is doing as a clear violation of Ukrainian people's rights,” says Zharova, referring to the latest flare-up in tensions between the two countries following a large Russian troop buildup along their shared border.

“Right now, we’re trying to figure out how we can spread the word and sway public opinion in Israel,” she adds. The Israeli government has thus far been playing a delicate balancing act, trying to avoid taking sides. Last week, the Ukrainian ambassador to Israel was called into the Foreign Ministry for an official rebuke after he accused Foreign Minister Yair Lapid of sharing “Russian propaganda.”

Vyacheslav (“Slava”) Feldman, who immigrated to Israel from Ukraine in 2004, is another co-founder of Israeli Friends of Ukraine. Like Zharova, he effectively cut himself off from Ukraine after moving to Israel. But he says the invasion of Crimea, and the violent crackdown against pro-Western Ukrainian protesters that preceded it, awakened his sense of identity with his birthplace.

“Most Israelis don’t know how to differentiate between immigrants from the former Soviet-bloc countries,” says Feldman, 44, a production manager in a green-energy company. “As far as they’re concerned, we’re all ‘Russians.’ My pro-Ukrainian activism was partly a response to that.”

Like Zharova, Feldman recently added a Ukrainian flag to his Facebook profile in an act of solidarity with his homeland.

More than 1 million immigrants from the former Soviet Union live in Israel today, the vast majority of them from Russia and Ukraine. According to rough estimates, there are close to 400,000 immigrants in each group, with the Ukrainian-born immigrants outnumbering their Russian-born counterparts by a small margin. Per capita, it is likely no other country is home to as many immigrants from these two countries as Israel is, with many living in the coastal cities of Haifa, Bat Yam and Ashdod.

Although the Russia-Ukraine conflict is playing out thousands of miles away, it remains personal for many of these immigrants.

It used to be easier to figure out who was on which side. The Russian immigrants sided with Russia, and the Ukrainian immigrants with Ukraine. That was true at least for the old-timers – those who had arrived in Israel during the huge immigration wave of the 1990s.

But in the past few years, notes Zharova, this has become less pronounced because of the so-called “Putin aliyah” – opponents of Russian President Vladimir Putin who have been fleeing Russia and who hold no emotional attachment to their birth country.

“You’ll find that those who came on aliyah from Russia many years ago tend to support Putin,” she says. “They like his muscle-flexing. But the newer arrivals, who by and large belong to the intelligentsia, are much more likely to side with Ukraine.”

Take Arkady Mayofis, for instance. The founder of a popular independent television network in Siberia, he escaped to Israel five years ago after his enterprise was closed down by the Russian government and he was threatened with arrest. Since moving to Israel, Mayofis says he has been trying to influence public opinion among Russian-speaking Israelis through his large Facebook following.

“Ukraine needs as much support as it can get, as Russia has become extremely aggressive,” says Mayofis, 60, who recently set up a new business of food gifts from Israel.

And yet, he laments, many of his acquaintances – including members of his own family – remain unconvinced. “They get their information from Russian television,” he explains. “I’ve come to realize it’s best not to bring it up with them.”

It would not be the first time a Russia-Ukraine conflict has turned a Jewish family on itself. Feldman, for example, has stopped speaking to his uncle, who lives in Russia.

“Once he started accusing me of supporting child killers, I cut off all contact,” he relays. “These people are completely brainwashed, and it’s all because they watch Russian TV. I, for one, stopped watching it 15 years ago.”

Although he is not a big fan of Putin, Russian-born Leonid Rabin, who immigrated to Israel in 1993, says he fully supports “Russia’s right to defend its republics.”

An employee of the Mega supermarket chain, he is convinced that Russia wants to avoid war. “They have absolutely no reason to invade Ukraine, and they’ve already made that clear,” says the 61-year-old. “It’s just a shame that the Ukrainians are trying to provoke them.”

Daniel Krivoshapov, who is also pro-Russia, says he still can’t forgive the Ukrainians for collaborating with the Nazis in World War II. The fact that the country now has a Jewish president, Volodymyr Zelenskyy, hasn’t changed his thinking. “To this day, the Ukrainians treat Stepan Bandera as a hero,” says Krivoshapov, 55, referring to the Ukrainian nationalist who was aligned with Nazi Germany.

Referring to Putin as “a man – not a woman,” Krivoshapov says that during a recent trip to Russia, after being away for many years, he was impressed by how much the quality of life has improved there. “Putin behaves like a landlord – a good landlord,” he says.

Krivoshapov has paid a price for his allegiances. “I used to have a group of friends I’d get together with every weekend,” he says. “We’d go on trips together and have meals together. But many of them are pro-Ukrainian, so we’ve lost touch.”

Janna Ruderko, 65, moved to Israel 10 years ago from a rural region in the south of Russia. Her father was a Ukrainian non-Jew (“a real Ukrainian,” as she puts it), her mother a Russian Jew. She’s unabashedly pro-Russia.

“It used to be that the Ukrainians hated Jews,” she says. “Now it’s the Russians they hate. And it’s very difficult for me to hear all the awful things they say about the Russians.”

To be sure, relations between the rival camps in Israel are nowhere near as tense as they were eight years ago when the war erupted in Crimea. At that time, recounts Shimon Briman, there were demonstrations outside the Russian and Ukrainian embassies in Tel Aviv, workers were getting fired for being on the wrong side, families were splitting apart, and social media was ablaze.

An immigrant from the Ukrainian border city of Kharkiv, Briman was working at the time as the Israel editor of a New York-based, Russian-language newspaper. So strong was his allegiance to Ukraine, he recounts, that he refused to publish a column written by his Crimean-born, pro-Russian cousin, trashing it as “pro-Putin propaganda.”

Briman, 50, has since moved on and now works as the Israel liaison for Ukrainian Jewish Encounter, an organization that seeks to mend and strengthen relations between Ukrainians and Jews.

“People are a bit exhausted by now,” he says, explaining why this new phase of the Russia-Ukraine crisis isn’t sparking the same level of emotion. “After all, eight years have gone by and for many Israelis from the former Soviet Union, it’s starting to feel like a never-ending war.”

Based on his observations, the longer they live in Israel, the more jaded these immigrants become. “It’s mostly among the newcomers that this is still a burning issue,” he says.

According to Briman’s estimates, some 20 percent of Israel’s Russian-speaking community currently side with Russia, another 20 percent side with Ukraine, and 60 percent – that is to say, the majority – don’t care either way. “It seems that people have lost their appetite for arguments and care more about what’s happening in Israel than what’s happening over there,” he says.

Igor Gurevich, 67, another immigrant from Kharkiv, represents this apathetic majority. Landing in Israel in 1989, he was part of the first batch of immigrants to arrive on the big aliyah wave that followed the collapse of the communist bloc. Now retired, he worked for many years in the tourism industry in the mixed Jewish-Arab coastal city of Acre.

Asked whether he supports Russia or Ukraine, Gurevich responds: “I support Israel.” He adds: “What’s going on there is all posturing. The Ukrainians are trying to get money out of the West and have been talking about the threat of war for a long time. But there’s not going to be a war. It’s all a lot of blah-blah-blah.”