How maps of the Land of Israel never lost their roots 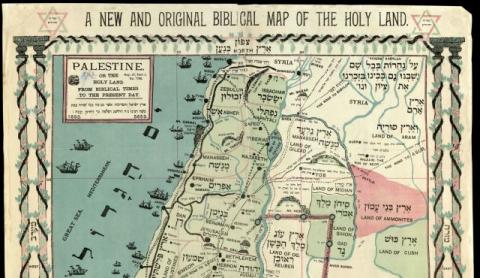 A new Hebrew-language book featuring old Jewish maps of the Land of Israel contains a treasure trove of colorful maps, revealing gems both large and small. Printed on chrome pages in a wide format, Prof. Rehav “Buni” Rubin’s “The Shape of the Land” offers real pleasure to map lovers or to anyone interested in the visual representation of the Holy Land for the past millennium.

A map of the Land of Israel by Jacob Goldzweig, dating from 1893. Photo by Wikimedia Commons.

The earliest Jewish maps of the Holy Land, unearthed and collected by Rubin, were sketches made by Rashi (Rabbi Shlomo Yitzchaki) in the 11th century. In these maps, the greatest Torah exegesist schematically presented the regions of Israel through which the Children of Israel passed after the exodus from Egypt, as well as the borders of the Promised Land as described in Numbers 33-34. The maps also contain simpler sketches by Rashi. These sketches served as an aid in Rashi’s seminary, and their role was mainly an interpretive one.

The Land of Israel portrayed in them is more a talmudic concept than a real place. Rubin suggests that these sketches express the fondness Rashi felt for the Holy Land, as well as an echo of Christian-Jewish polemics. The efforts made by Rashi to define the relative positioning of each site described in the Bible, as well as his writings, place the interpretation of the holy text at the maps’ center, rather than attempting to describe a real geographic entity. Thus, for example, there is an illustration of Jacob’s Ladder leaning over several locations – Jerusalem, Be’er Sheva and Beit El. The difficult-to-interpret associated verse with which Rashi was contending (Genesis 28:10-19) refers to the words of Jacob relating to Beit El (“Surely the Lord is in this place”).

An earlier biblical text conferred sanctity on Beit El, whereas in later traditions of the sages the house of God referred only to the temple in Jerusalem. This interpretation created a ladder whose legs were planted in Be’er Sheva [Beersheba in the Bible], where Jacob started his journey, and whose head was in Beit El, the site of his dream. The central portion symbolizing the heart was next to Jerusalem – the house of God indicated by Jacob. Rashi’s sketch was, therefore, intended to clarify this interpretation rather than describing a geographical reality.

Icons of the Holy Land

Using many examples, Rubin shows how Rashi’s sketches became iconic representations of the Holy Land. They were copied and disseminated by numerous interpreters of his writings – from the 13th-century French rabbi Hezekia Ben Manoah (“Hazzekuni”) to the commentator Rabbi Elijah Mizrachi in the early Ottoman Empire, right up to the 19th century. These maps, even in their schematic format, are far from realistic. The Red Sea is depicted as a large body of water, located south of the great desert. The Dead Sea is shown as emptying into the Red Sea. The Jordan River is shown as crossing Transjordan diagonally, while the Sea of Galilee (Lake Kinneret) is a small bay off the northern section of the Dead Sea. This latter detail can be ascribed to talmudic traditions, according to which Miriam’s Well was submerged in the Kinneret, shifting the crossing of the Jordan to the Galilee. A familiarity with these traditions and an attempt to reconcile them with the location of Jericho may have led the people who sketched this map to combine the Sea of Galilee and the Dead Sea.

Maps based on Rashi’s sketches were improved during the Renaissance, acquiring illustrations of cities, mountains and ships – as was customary in that period. However, they still remained icons of the Holy Land, whose sanctified status relied on the stature of Rashi.

Rubin devotes an entire chapter to the Mantua map designed by Yitzhak Ben Shmuel Basan and Yosef Ben Yaacov from Padua in the 16th century. This map is unique in that it is based on Rashi’s sketches, but transforms them into a Renaissance-style map with rich decorations. The text on the map directly confronts the traditional depiction of the Holy Land, basing itself not on any new knowledge of geography but simply on plain logic. The maps based on Rashi’s sketches show a large Red Sea, located south of Egypt and the desert. Thus, crossing it once would necessitate a second crossing before entering the Land of Israel. Since this is not mentioned anywhere, the makers of the new map deduced that the Red Sea has to contain a bay which juts into the land, which they indeed added to the map.

It is fascinating to see that, although in the centuries following Rashi, geographical information on the Holy Land became increasingly available to Europeans, this knowledge wasn’t reflected in new visual representations of the land. Even in the 19th-century Ladino anthology and Torah commentary “Me’Am Loez,” the older illustrations were used – even though the Sephardic communities who printed many editions of this book knew the geography of the Holy Land much better than Rashi could have imagined in his time. Still, the iconic sketches were left unchanged.

The fourth chapter of Rubin’s book is devoted to a totally different type of Jewish map that began to appear in the modern era. These maps strived for a realistic representation, decorated with whatever was customary in each period. The Holy Land was now seen as a realistic geographic entity, overlaid with the important biblical stories. Thus, these maps still maintained their symbolic status. A permanent feature of these maps is the stations crossed by the wandering Jews in the desert, perhaps resembling a Via Dolorosa on the way to redemption in the Holy Land. Rubin researched the origins of these maps and found that they were all Jewish adaptations of Christian maps. The book shows the Christian maps alongside their Jewish counterparts. Thus, one can compare the similarities as well as the differences, which highlights the work of the adapters and the principles that guided them in their adaptations.

The sixth chapter is devoted to holy site lists that were published in the 19th century. These contain illustrations of landscapes, with panoramic yet distorted views. These illustrations were probably intended as decorations for houses or synagogues, similar to drawings of the “Orient” that were common in Jewish communities at the time. Such drawings also served as mementoes for donors who supported traditional communities in the Holy Land. The sites depicted often followed the pilgrimage route of Jews in the 19th century, restricting the notations to the Four Holy Cities [Jerusalem, Hebron, Tiberias, Safed] and the tombs of Jewish saints. Here, too, the land is a pilgrimage destination rather than a regular geographic space.

The seventh chapter shows the first attempts to present the Holy Land on the basis of modern scientific knowledge. These are maps drawn by Jewish scholars in the 19th century – again, as in previous centuries, inspired by Christian scholars. These maps reflect a somewhat ambivalent attitude, conflicted between novelty and tradition. It is clear that, despite all the new geographic information, there is still a desire to present the Holy Land according to traditional criteria, with an attempt to decorate them in an “Oriental” style.

A fascinating example is a map by Jacob Goldzweig, dating from 1893. The map reflects geographic facts known at the time, including railway lines and the Suez Canal, but the design of the map is still traditional. The rivers of Babylon are placed too close to Israel, in order to include them on the map, along with the words “on the rivers of Babylon,” with their reminder of exile. The map is framed in a classic style, with pictures of holy sites at the bottom, similar to older-style pictures, and lists of holy sites such as those appearing in the book’s sixth chapter. Another detail that highlights the traditional style is the depiction of the crossing of the Red Sea. The route taken by the Israelites is shown as a thick line in the desert but broken up into 12 thin lines while crossing the sea, reflecting an old tradition suggesting that each of the 12 tribes crossed separately.

With the appearance of the Zionist movement, the Holy Land changed from an abstract religious concept to a concrete entity. The book ends with a few examples of Zionist maps, opening room for reflection on how the land continues to live on as a religious concept affecting scientific representations, and how one can emphasize certain aspects of reality in modern maps and use names to shape a political reality, preferring some historic periods over others.